Round 7 AFLW Wrap Up: 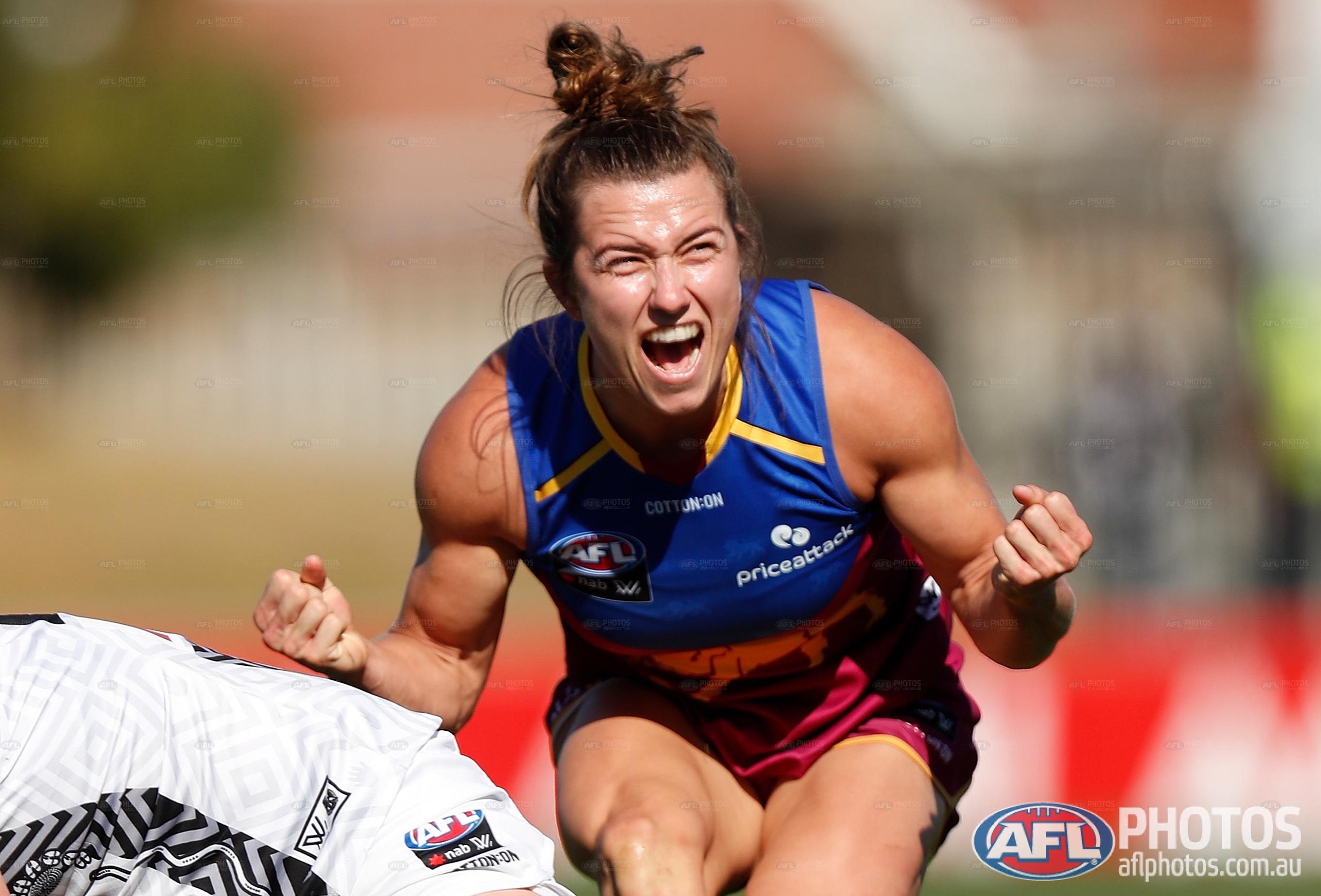 Round seven is complete and no team remains undefeated after the Brisbane Lions became the first side this season to put an end to Collingwood's perfect run.

With the win, the Brisbane Lions have become a geniune premiership contender and go equal first along with Fremantle and Collingwood on the ladder with a 6-1 win-loss record.

North Melbourne continued their winning streak and now have won three in a row.

North Melbourne's Jasmine Garner put on a show in Tasmania, showing her greatness as a player.

Richmond secured their second victory of the season on Friday night, after surviving a massive scare to overcome a winless Gold Coast Suns by 15 points at Metricon Stadium

It was a strong showing from the Tigers in the first half and they kept the Suns scoreless in the second quarter, as they went into the main break with a 15-point lead and they look like they were headed for a huge win.

After the Suns managed to trim the margin to three points, it was all the Tigers scoring the next three goals to hold on to the 6.5 (41) to 4.2 (26) victory.

It was a day out for Tigers captain Katie Brennan who nailed through three goals to go along with her 15 disposals and five marks, while fellow star midfielder Monique Conti after a week off from a hamstring injury accumulated a match-high 25 disposals (63 percent efficiency) and seven tackles.

Next week, the Gold Coast Suns will host Carlton at Metricon Stadium on Friday twilight in hopes of breaking through with their first win of 2021, while Richmond will host the West Coast Eagles at Swinburne Centre on Sunday afternoon.

GWS Giant forwards Cora Staunton and Rebecca Privitelli steered the Giants to a 20-point win over St Kilda in heavy rain at RSEA Park on Saturday.

The Giants meant business in the opening term kicking four goals and keeping the Saints goalless and to a behind.

It was a different story in the second quarter, as the Saints dominated the contest and they should have taken the lead but their inaccurate goal kicking let them down.

They scored two goals and six behinds, while keeping the Giants scoreless.

The wet conditions did not faze Staunton who is used to torrential rain from her time playing Gaelic back home in Ireland.

Staunton scored a goal in every quarter apart from the second.

In round eight, the Giants will play against Geelong at GMHBA Stadium on Saturday afternoon and St Kilda will need to be ready for Collingwood at Victoria Park on Saturday afternoon, a side that will be determined to get back on the winners list after going down for the first time this season to the Brisbane Lions.

North Melbourne are a step closer to playing finals this season after they defeated a valiant Western Bulldogs at North Hobart Oval in Saturday twilight.

North Melbourne have all but locked in their top-six spot on the ladder thanks to powerful performances from Jasmine Garner and Emma Kearney who were dominant forces in North's third consecutive 5.7 (37) to 3.8 (26) victory.

It was all North in the opening, as they flexed their muscles with three opening term goals while keeping the Dogs to a behind.

The contest tightened up more in the second quarter, as the Dogs kicked into gear and put a halt to North's scoring power and dominance narrowing the margin to 11-points at the main break.

After quarter time, the Dogs came hard at North but North's skipper Kearney was able to give her side some much needed breathing space kicking the only major of the third quarter on the three quarter time siren to provide North with an important 21-point advantage.

It was all the Dogs in the final quarter, but they were unable to get much reward for effort only recording one major and North were able to breathe a sigh of relief holding on as 11-point winners.

Next round, North Melbourne will try to stake their premiership claims when they come up against fellow competition heavyweight and ladder leaders the Brisbane Lions on Saturday twilight at the Gabba, while the Western Bulldogs will aim to keep their slim finals hopes alive and topple the Adelaide Crows on their home deck on Sunday afternoon at the Norwood Oval, a tough task as the Crows have made it a fortress.

Melbourne strengthened their top-six hopes and their chances of playing finals for the first time this season with a solid outing to defeat the Adelaide Crows in cold and rainy conditions at Casey Fields on Saturday night.

It was a solid display from the Dees, as they sent a strong message to the rest of the competition that they mean business in 2021.

They played finals type intensity and played like the Crows with their pressure in and around the contest winning 6.7 (43) to 2.3 (15).

For the Crows, it was an uncharacteristic performance from the two-time champions being kept to a goal in the opening three quarters and only kicking their second goal of the match at the fifth minute mark of the last term via Rachelle Martin.

The Dees midfielders including Tyla Hanks and Karen Paxman took it right up to the Crows midfield brigade of Ebony Marinoff and Chelsea Randall.

Hanks was best on ground starring with 24 disposals, five tackles and a goal, while Eden Zanker, Lily Mithen and Paxman supported her well.

It was a well rounded performance from all the Dees midfielders.

In round eight, Melbourne will need to be on their game once again as they come up against another competition heavyweight in the Fremantle Dockers at home (Fremantle Oval) on Sunday twilight.

Meanwhile, the Adelaide Crows will host the Western Bulldogs with hopes to fly back onto the winners list at Norwood Oval on Sunday twilight.

Fremantle Dockers charged home late with three goals in quick succession in the final nine minutes of the match to leave a brave Carlton shocked to win by four points at Ikon Park on Sunday afternoon.

The loss for the Blues means that they will not feature in this years finals series, despite leading the match in the first three quarters.

It was a loss that left the Blues flat, as the Dockers turned the match on its head and gained control in all facets of the match late to scrape through with the 6.9 (45) to 6.5 (41) victory.

Fremantle Dockers' Kiara Bowers was pivotal in the win and contributed 28 disposals, 22 kicks and 10 tackles, while Sabreena Duffy (10 disposals, six kicks and two tackles) brought the Dockers from the brink of defeat with two back to back final quarter goals.

Carlton's best was Kerryn Harrington who finished with 22 disposals (77 percent efficiency), 17 kicks and two tackles, while Nicola Stevens played her best game up forward with her pressure scoring two goals and racking up 14 disposals, 10 kicks and five tackles.

Next week, Carlton will travel to the Metricon Stadium to play the Gold Coast Suns on Friday night, while the Fremantle Dockers will host Melbourne at the Fremantle Oval on Sunday twilight.

In the match of the round, the Brisbane Lions were able to hand Collingwood their first defeat of the season, after Collingwood swooped with two last term goals to be victorious by three points at Whitten Oval on Sunday afternoon.

It was an incredible effort from the Lions, as less than 24 hours before the first bounce they thought they were hosting the Pies in Brisbane but due to the recent covid scare at a Brisbane hospital the Lions were put on a flight to Melbourne.

The Lions played well in the blistering conditions at their home away from home at Whitten Oval to record their sixth victory 4.11 (35) to 4.8 (32).

It was a game that was dominated by the Lions in the opening three terms and the Lions should have been in front by way more on the scoreboard if they had kicked accurately at with four goals and 10 behinds.

The Lions had a 18 point lead at three quarter time.

In the final term, the Pies came out and almost stole the match from the Lions with two unanswered goals courtesy of Irishwoman Aishling Sheridan and Joanna Lin.

The Pies kept on pushing the Lions, but could not get that final goal to ensure they pulled off one of the great comebacks of the season.

For the Lions' Ally Anderson was her side's best with 26 disposals, 19 kicks and one tackle, while Jess Wuetschner, Courtney Hodder, Cathy Svarc and Shannon Campbell all scored a goal each.

It was a solid performance from the Lions to keep Chloe Molloy quiet in the match, she only had five disposals.

Although Bri Davey was restricted to 14 disposals, her 14 disposals (69 percent efficiency) were quality to go along with her 11 handballs and seven tackles.

In round eight, the Brisbane Lions will host North Melbourne on Saturday twilight at the Gabba and Collingwood will host St Kilda on Saturday afternoon at Victoria Park.