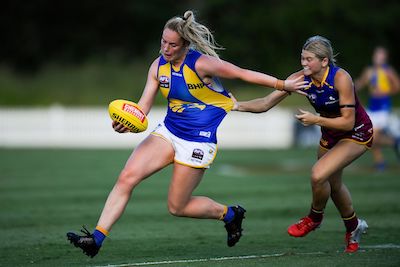 Round 3 demonstrated the need for flexibility in the 2021 season, as several games were changes last minute and only one of the Victoria games was played with crowds.

Dani Marshall was not named for Friday’s game against Geelong Cats.

Cora Staunton, #13 started in full forward against the Suns. In the first quarter alone, she had more chances than the previous week. An opportunity that was stopped by a loose defender goaltending on the line, a smothered kick not too far from goal, and a set shot missed for a minor score. Staunton spent most of the second quarter at the defensive fifty trying to help the Giants penetrate the Suns wall and gain some forward momentum. In the second half Stuanton had another shot on goal result in a point, just missing the around-the-body kick. She also had an amazing setup for Jessica Dal Pos.  After getting the hands from a teammate, under pressure and on-the-run, she hit Dal Pos with a beautiful kick over the top. Staunton looked a little bit sharper and had a few more disposals than previous weeks. She remains tough at the ball, but the all-time leading goalkicker for Giants AFLW is still looking for her first goal of 2021.

This game featured no international players.

Niamh McEvoy, #17, played her first game of the season against Roos. Starting in the interchange, she rotated into the forward line. When going up for her first big contest, she drew the foul and took a knee to the back. Just outside of a comfortable goal, she fed the runner coming through. Later in the first half, McEvoy took a great mark around 40 meters out from goal. Again she opted to pass it off, this time kicking to a lead from Shelley Scott and setting up Scott’s first goal of the night.  McEvoy ended the night with 6 disposal and 2 marks, and a team victory to celebrate.

Sinead Goldrick, #23, played the best game of her career in the backline on Saturday. Her performance earned her a spot in the best on ground for Melbourne, a slot in the AFLW team of the week, and polled coaches' votes from AFLCA.  Goldrick played aggressive, both fast and physical this game. She used her speed and read of the ball to get front position for most contests, bringing the ball to ground and working with her team to get it up the field. She also read her team well, bursting through packs and providing an on-the-move option to contested play. She found her teammates with the ball, on the boot and with the hands, resulting in her career-high disposal count of 14, though it definitely felt like she had a bigger impact than that. While she is good at bringing the ball to ground in contested play, she also had her career-high mark count with 4 marks. Overall, it felt like Goldrick was involved in every play on defense and she had an impact with pressure and contact even when she didn’t possess the ball.

Aileen Gilroy, #8, had a solid game at half-back flank against the Demons. In the opening minutes she prevented a Melbourne shot on goal with a good hard tackle. Her pressure in the first quarter was outstanding. At one point she cleared the ball from the goal line with the offense in hot pursuit. In the second half, she spent a lot of her time locking the ball into their offensive half. Her kicks were long, with both the left and right foot, easily kicking the full distance of the 50 square. She held her structure, and peppered the ball back into the forward-fifty for her team. She ended the game with a career-high 15 disposal effort and 3 marks, one of which was intercepted off of Goldrick’s kick.

Ailish Considine missed this round due to a concussion that occured in AFLW Round 2.

Aishling Sheridan, #14, had another great game on the forward line for the Pies. Again she had two goals and a behind, totaling 13 of Collingwood’s 48 points. Her performance on Saturday puts her at the top of her team with Brianna Davey for scoring involvements in 2021, averaging 4 per game. Sheridan’s first goal came with a minute left in the opening quarter. Making a hard lead to the edge of the 50 for Jaimee Lambert, she collected the ball, made a hard turn, and booted the ball to the goal square that bounced in for six points. She had another chance at goal in the second quarter, picking the ball up on the run, but opting to unselfishly handpass to a teammate instead of taking the left footed shot under pressure. It was in the third quarter when Sheridan got her second goal. A handpass led her over the top and with the bouncing in front of her, she smoothly scooped the ball up at speed on the run. From high in the pocket, while under pressure and running at speed, Sheridan kicked a beautiful ball which bounced through, echoing her goal from the first quarter. Overall, Sheridan is improving week over week. Her leads are timed well, and her ability to turn at speed and find the goal from a distance and awkward angles makes her a dangerous member of Collingwood’s forward line.

Sarah Rowe, #7, also started in the forward line against the Tigers. She had a quieter week, with no scores from her directly. As always, Rowe ran hard to provide options and support for her team, her speed an ever-present threat to the Tigers’ backline. When the ball was back in defense, Rowe could be seen helping pressure and move the ball forward, giving her team opportunities to score. In the game, Rowe still recorded 4 marks, 1 tackle, and 11 disposals.

Orla O'Dwyer, #9, ran the wing again for the Lions. Again she kept structure well and pushed hard to provide options for her team. Her 1-2 handpass play with Natalie Grider set up the Lions for the opening goal of the night. She set up another goal in the fourth quarter, bringing a contested ball to ground and feeding hands to a runner who hit Tayla Smith in the hotspot. While she didn’t record a goal of her own on Monday, O’Dwyer was halfway there with three minor scores on the day including a quick snap that went just wide. Overall it was a solid game from O’Dwyer, who worked hard to provide opportunities for her team to get goals on the board.

McCarthy, #11, had another best on ground performance in the midfield for the Eagles. In the first minute of the game, she snagged a mark in front of the goal, stepped back, and then slotted her second goal of the season and the opening goal of the game. She was excellent at attacking the ball and providing options for her team. In congested play, she could be seen providing good options at visible angles for her teammates. She seems to know instinctively when to pick up the ball and when to bat it forward for her team’s advantage. She had the highest disposals for the Eagles, with 18, and tied for the highest tackle count on the team with 4 credited tackles.

Niamh Kelly, #12, was out this week with an injured finger from Round 2.

Grace Kelly, #15, was at half-forward flank again to face the Lions. Her team had an excellent start to the game, and she played her part with clean hands grabbing the footy off the ground, feeding her teammates, and putting on good pressure. Unfortunately Kelly didn’t see much of the action in the second half, as the Lions turned up the pressure and dominated the game. Kelly’s most memorable play was getting the ball on the run, taking a bounce, then a beautiful kick at the goal with the left foot, just missing the big sticks but grabbing her first score for 2021. In addition to her point, she recorded 11-disposals and 2-tackles for the day.