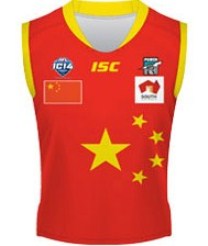 China returns for their third consecutive International Cup and will be keen to show off their new look squad to an unsuspecting audience. Following on from their fifth placing in Division 2 in 2011 (which was already an improvement on their 15th placing in the 2008 debut), this year’s squad has been working solidly across a range of areas and expect to ruffle more than a few feathers.

The People's Republic of China (PRC) is the most populous state in the world, with over 1.3 billion citizens. The PRC exercises jurisdiction over 22 provinces, five autonomous regions, four directly administered municipalities (Tianjin, Shanghai, Chongqing and the capital city- Beijing), as well as two special administrative regions (SARs) – Hong Kong and Macau

Since an AFL development officer was first based in China in 2006, it has been a big few years for Australian Football in the region. There has been further and rapid consolidation of clubs in the major cities and the AFL has expanded promotion of the game in local schools and universities. The success and impressive crowd turnout of the Melbourne vs. Brisbane exhibition match in Shanghai in 2010 during the World Expo further exposed the potential for expanding the game into China and the subsequent creation of a purpose built ground in Tianjin in 2011 further validated and developed the opportunities for the game in the country.

As a further show of the growth of the game and growing links back to Australia, Port Adelaide Football Club have this year stood up and underwritten the team’s tour as their major sponsor, showing their continued support for AFL in South China.

Team coach this year, Jiaming (Jamie) Pi sees a whole new philosophy about Australian Rules football in China, which will completely change the way the nation approaches this year’s International Cup. “We have had a big change with myself as a Chinese coach. For the game to be embraced in China it has to be discussed within the Chinese languages. We speak of the game in our language and have a wholly Chinese team this year. When relaying messages we speak Chinese so that nothing is lost in translation. This has been a coaching mandate. We have already been together as a team and are undertaking two weeks of two sessions per day which includes team bonding sessions, strategy skills, football skills and running.” Previous incarnations of the Chinese team have seen the bulk of players coming more from the stable of the Beijing Bombers and Shanghai Tigers with a lesser number of Chinese nationals in the squads. This squad boasts all players being Chinese nationals which will increase appeal both at the event and to audiences back home in China as they continue to grow the game.

According to Darren Whitfield, the secretary of South China AFL and Vice-president of AFL Asia, the core of Team China is the 28 player squad flying down from Guangzhou, China, about 4 hours bus ride from Hong Kong. These players play in the South China Australian Football league (SCAFL) with teams from Guangzhou Scorpions, Guangdong Seagulls, Macau Lightning, and 3 Hong Kong teams, HK Typhoons, Kowloon Cobras, and Lantau Lizards.

Many of the players are or were students at a Guangzhou Sports University and are natural sportsmen in many sports.

Zhang Hao also adds that “in order to get better result than before, we had started the training from 15th July. We live together and train together. It is a very different experience for every player. We always organize the skill training in the morning and body training in the afternoon.”

The Chinese team certainly has a tough draw, coming up against Canada, New Zealand and Finland. Not one of those games will be a “gimme” and the Chinese players will have to be at their very best to threaten. But according to their coach, Jamie Pi, “we have turned a corner and are at the start of a journey. We don’t have the expectation of where we finish, but will be judging our performance simply by giving a good showing. But Jamie does believe that some of their perceived “weaknesses” might just be unexpected strengths come match day, so it would be unwise to rule China out of any game.

Again, the team wants to acknowledge the generosity and support of the Port Adelaide Football Club in underwriting the tour and making it possible for a Chinese team to be at the IC14 event.