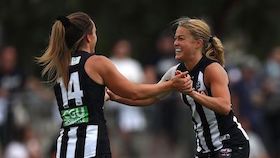 Round 2 was full of excitement. Several game schedules got changed due to the quickly-changing landscape of Australia border laws. Let's take a quick look a how our international talent faired in the matchups.

Bulldog Danielle Marshall, #26, was omitted from the lineup this week. After spending a few games last year and round 1 stepping in for injured rucks, it has been a bit since she’s had the game-time to prove herself on the forward line. We hope to see her back kicking goals soon.

Sarah Rowe, #7, was a new in for Collingwood after missing round 1 with a nagging shoulder injury. She lined up on the wing for the first bounce, clearly eager to get a touch and show her speed. She wasn’t on the wing long, and it became a chore to guess where Rowe was as her yellow boots raced all over the midfield. Rotating into the forward line and near fellow-Irishwoman Aishling Sheridan, #14, Rowe appeared to hold more structure but still never stopped moving. On the field, she hasn’t missed a beat, racking up a solid 14 disposals and setting up Brianna Davey for a beautiful goal in the fourth quarter. Within seconds of the following center bounce, she was scoring herself, linking up with Sheridan for an Irish goal. Sheridan fed Rowe with a handpass, which Rowe dropped onto the left boot for a textbook shot-on-goal and six points. At the end of the match, Rowe had a best on ground performance, having played the majority of the game and registering 7 points for her team and 5 total score involvements. Her pressure and effort off the ball didn’t go unnoticed, and it was clear she made the most impact for her team while on the forward line.

Aishling Sheridan, #14, started on the full forward line for round 2 where she hoped for a repeat performance from last week. While she showed a lot of hustle and opened up the field with unrewarded runs, Sheridan only booked 1 mark for the day. She did manage to rack up 3 tackles and 12 disposals, including a handpass to set up Rowe’s first goal of the season. Sheridan didn’t manage to slot one through the tall sticks this round, but did kick two behinds for her team. When the ball was in the forward half of the field, Sheridan could often be seen presenting as a target at the top of the hot spot and closest to the goal. We expect her to have plenty of scoring opportunities this season. In fact, Sheridan is currently second on the team in score involvements with a total of 7 for both rounds.

Starting lineup for Melbourne was announced to have no changes, meaning both Niamh McEvoy (emergency) and Lauren Magee (omitted) would be watching from the stands again.

Sinead Goldrick, #23, lined up at half back flank to start the first quarter. It quickly became clear that her plan was to tag Tigers’ captain Katie Brennen. Goldrick silenced both Brennan and the commentators questioning her physicality by keeping Brennan to a single behind and zero marks. Her physical presence wasn’t lacking and her speed stood out, when beating forwards to the ball and running through a pack as an option.  She had the step on Brennan for most of the game and was in front for the majority of their contests, effectively nullifying Brennen’s offensive threat. The few instances where she was a step behind, she was physical enough to not allow Brennan a clean mark of the ball.  Her ability to beat the forward on the lead, bring the ball to ground, and then cleanly distribute to fellow Demons will continue to make a huge impact on the game.

Aileen Gilroy, #8, had another excellent performance on the Roos’ half-back line. She could be seen beating the opposition to the contest, maintaining clean hands under pressure, and clearing the Sherrin down the field. Her defensive pressure was excellent, creating opportunity for her team with tackles and intercept possessions, and she didn’t seem to make a misstep on the day. Gilroy cleared both up the line and to the open side with a long switch, and she was equally strong with both the right and left foot. Her performance was so solid, and she was rewarded with a coach’s vote for the game. With her speciality and go-to being the long, space-creating kick, it is no surprise Gilroy currently leads her team in intercept possession, meters gained, and rebound 50’s.

Orla O’Dwyer, #9, started on the wing for the Lions. Disciplined and patient, she held her space well and created opportunity by staying wide for her team. O’Dwyer transitioned quickly, having successful play on the offensive and defensive side of the ball. Defensively, she was hard at the play with five tackles and plenty of more bumps to make the Suns regret coming to her side of the oval. Offensively, she snagged two marks and created many more opportunities for her team with 18 solid disposals. It was interesting to see the left-footer line up on the right wing, but she didn’t seem out of place with 11 of her disposals off the boot.  Overall, a solid effort from O’Dwyer who is a workhorse for her team.

Ailish Considine, #16, rotated into the forward line again, providing support to the Crows’ many superstars. One of her best plays of the day came about 9 minutes into the game. She provided a good outlet option to a pack just inside the defensive fifty, getting it on the hands and clearing it to the top half of the center square. Making a quick run up the field, she was able to provide support and scramble on the ground to keep the Crows’ advantage and immediately provide another outlet to the pack. From there she threw the ball on her left boot, kicking it to space in front of the forward options. While it didn’t result in a goal, it demonstrates her hustle, second efforts, and range of ground covered. Unfortunately, Considine suffered an injury  just a few minutes into the second half, so we were unable to see her add to the 7 goalkickers on the Adelaide side. Picking up the ball on the run, Considine took a rough tackle and was slammed into the ground, sidelining her for the day due to potential concussion. If officially ruled a concussion, she will be benched for 12 days, ensuring full recovery, but missing their first home game in Round 3 against the Dockers.

Cora Staunton, #13, was on the forward line again for GWS, though she seemed to not be playing as deep as she did in the previous game. She didn’t see the ball much, and when she did she was surrounded by Crows. Her team struggled with controlled forward entries, rarely putting the ball to their own advantage and making the forward and midfield lines look out of sync. While she only registered 8 disposals for a second game, most of those possessions were self-created with excellent forward pressure. Staunton was hunting Crows on the forward line with five credited tackles, the second most for the Giants on the day. Her best look at goal started with a tackle on the fifty arc, but unfortunately she was kicking into the wind, and her shot fell short.

Aisling McCarthy, #11, started again in the center, where she had another best on ground performance. She slogged through the midfield in a sloppy grueling game, where she had clean hands picking the ball off the ground, despite extremely wet conditions. McCarthy managed to kick the first of the Eagles’ two goals in the opening minutes of the game, after being fed by Niamh Kelly. She could be seen making defensive marks, in most contested play around the midfield, and trying to penetrate the forward line. McCarthy finished the game with a solid 11 disposals and 7 tackles.  At the end of round 2, she’s tied for the most number of tackles on her team with a combined total of 14, and leads the team for inside 50’s with a total of 6.

Niamh Kelly, #12, had a solid first half, registering 4 tackles, 4 disposals, and a mark in the downpour. Her first tackle gained possession on the offensive fifty and was followed by a kick to set up McCarthy’s opening goal. Standing on the goaline late in the second quarter, she prevented Freo from establishing a solid lead by punching a shot through for a behind. Unfortunately, N.Kelly suffered a dislocated finger in one of the final plays and sat out the second half.

Grace Kelly, #15, played opposite of her sister on the half forward line. Like N. Kelly, she had to work her way to the defensive side of the ground and provide support for her team. While she didn’t register a goal, her work-rate allowed her a better performance than last week and she more than doubled her disposal count and grabbed a few marks, an impressive feat in the downpour.