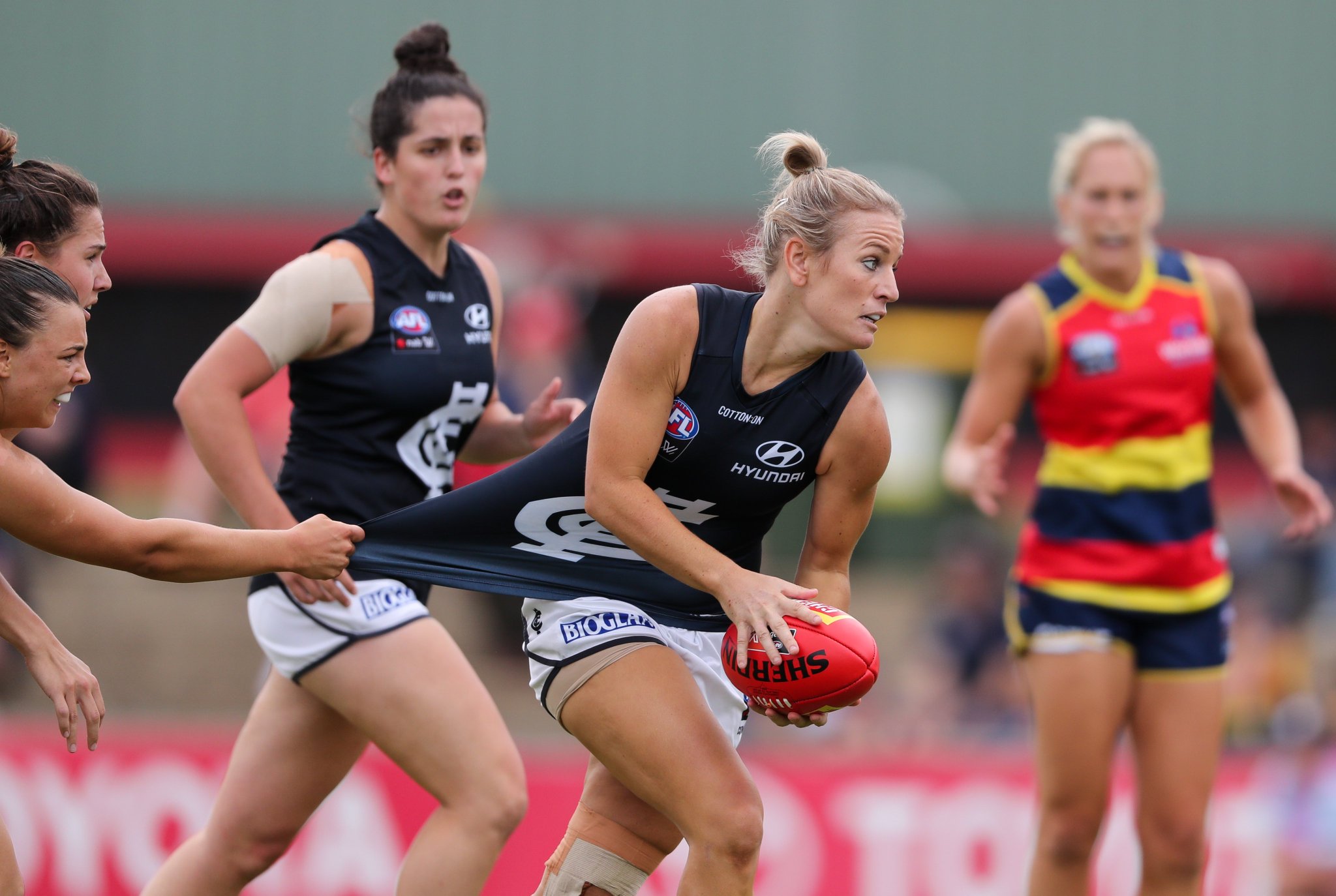 In an enthralling Grand Final rematch, the young Blues caused a boilover defeating the Crows by eight points at Hisense Stadium on Sunday afternoon, in front of 7,281 fans.

The match saw the return of arguably the competitions best player in Erin Phillips from an ACL injury and also teammate Rhiannon Metcalfe made her return after an ACL injury as well.

Tayla Harris was the star in the second half with two consecutive goals and made her presence felt in the forward half of the ground.

Young gun Maddie Prespakis was huge through the midfield with 20 disposals and a goal and Lucy McEvoy was ferocious with her tackling applying seven tackles.

Dual AFLW best and fairest Phillips made her impact felt in her first game, with her pressure up forward and in the middle and she ended with 13 disposals.

Crows Anne Hatchard was influential with 26 disposals and a goal.

It was an entertaining match with both teams playing a strong contested brand of football and it was everything AFLW fans hoped to get from a Grand Final rematch.

It was a tale of two halves with the Crows dominating the scoring in the first half with the first two goals before the Blues opened their scoring and the Blues owned the second half scoring five of the last six majors of the match.

Carlton did the majority of the attacking, but the Crows were more polished when they went into their forward line in the opening term.

Crows Metcalfe in her return game from an ACL injury snagged the only goal of the opening quarter in the Grand Final rematch and it was her first ever AFLW goal as well.

Crows led by a goal at quarter time.

Erin Phillips kicked nicely to Eloise Jones who kicked the first goal of the second quarter for the Crows to take the 12-point lead.

There was nice build up from the Blues to find Nicola Stevens in the forward pocket and Stevens made no mistake notching up the Blues first major of the afternoon.

Darcy Vescio received a free kick for a push in the back and she kicked to teammate Prespakis who slotted through the Blues second consecutive goal with less than 50 seconds left in the quarter.

Crows led by five points at the main break.

It was an entertaining half of footy in hot and humid conditions.

Carlton came to play in the second quarter lifting the intensity all over the ground.

A massive tackle was laid from Anne Hatchard who forced a free kick, Hatchard drew it low and hard nailed through the goal to open the scoring in the third quarter for the Crows.

Harris responded quickly with a goal for the Blues and soon after she slotted through a second goal to give Carlton the lead by a point halfway through the quarter.

Blues led by two points at three quarter time, as they took their game up a notch and took it right up to the Crows.

In the final quarter, the Blues came out strong and continued with the same high level of intensity that they had in the third term.

Clever finish from Vescio who used her body well to kick the goal on the line to get the Blues out to nine points midway through the final term and it ended up being the sealer for the Blues.

Vescio scored the only goal in the quarter and she stepped up being a roadblock in the Crows defense.

Crows ruckwoman Jess Foley did not finish the game with a left ankle injury.

Next week, Blues will come up against newcomers St Kilda at Ikon Park and the Crows will clash against premiership favourites North Melbourne at North Hobart Oval in what it is shaping to be a must win match with four rounds left in a tight Conference.