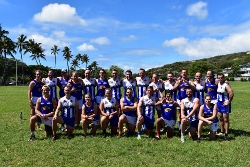 Few, perhaps nobody, would have thought a few years ago that Hawai’i might be the host of an Australian Football international match. Yet, last week, under the watchful eyes of Diamond Head at end of Waikiki Beach in picturesque Kapi’olani Park, that’s exactly what happened.

The Calgary Kangaroos from Alberta, Canada, travelled over to Honolulu, accepting a standing invitation from the Hawai’i Eagles club to come and play.

Earlier this year, World Footy News reported that the Eagles were “open for business” for teams from across the world to visit for a match (see Fancy A Holiday In Hawaii?). The Calgary Kangaroos apparently like to visit Hawai’i in February and so the match became a reality.

The Eagles were a little disappointed in the result, as you are when on the losing end of a tight match, stating that, “we didn't get the win, but we had a great time playing against our new footy ohana from the Calgary Kangaroos Australian Football Club.”

“The match was a blast, but it was awesome to swim, eat, drink, train, talk story, and just have a great time with a great crew of guys over the past few days here in Hawai'i. Thanks to their whole squad, but also our umpires, friends, significant others, time-keeper, photographers, United States Australian Football League, AFL Canada, and everyone that helps make this possible.”

“Hawai'i Eagles Australian Rules Football Club is always open invite to whoever wants to play, regardless of sex, gender, race, sexual orientation, nationality, age, height, weight, or even if you're from Alberta. Come have a kick, it's awesome. And, if you're in a club somewhere else, and you may want to come play us in Hawai'i, hit us up and we'll make it happen.”

All interest will now centre on whether another club from North America, or anywhere, decides to emulate the Calgary Kangaroos and travel to Hawai’i for a kick.