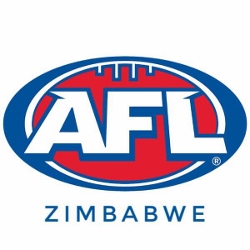 World Footy News recently had the opportunity to chat with one of the co-founders of AFL Zimbabwe, the latest country in Africa to rise to the challenge of creating an Australian Football team. Along with a growing team of committed lovers of the game from as far afield as Sweden, the USA and Australia, the team is slowly breaking down the barriers.

The short journey to date has seen a series of coincidental and fortuitous meetings of like-minded people bringing their talents and passions together. Here is their story to date.

Trystan Peckover arrived in Zimbabwe as a diplomat at the Australian Embassy. Soon after he met Ronan Wordsworth (another Australian) who was in Zimbabwe accompanying his partner who works for the UN. Both Trystan and Ronan had played AFL for the London Swans in the AFL London league, but at different times. A useful coincidence. Trystan had also since played for the Paris Cocks prior to moving to ZImbabwe.

“When Ronan and I met, we started talking about firstly having a bit of a kick around, and then maybe trying to get some ZImbabweans on board. It started out with five people - Ronan, myself, a Zimbabwean who had studied in Australia and played Aussie Rules, an American, and another older Aussie who moved to ZImbabwe in mid-2019 and was previously heavily involved in the Portland AFL team in the US.”

“That was the first ever training session, in September 2019, and from that moment on we have gradually built.”

As is the case almost everywhere that the game is taking root, patience and determination are required to grow the game.

Initially they were slow to build numbers, in part due to lack of awareness, partly due to difficulty finding appropriate grounds, and a bit of uncertainty as to the ideal training times to suit the Zimbabwean lifestyle (e.g. church times, shopping opening hours, cultural preferences).

They then created a Whatsapp thread, and shortly thereafter a Facebook page. Whatsapp has been the primary means through which they have gotten people involved. They would then meet people at bars, or through other extra-curricular activities and if they came across someone they thought would be keen they would add them to the Whatsapp thread.

“At the moment, we have 150 people or thereabouts on our thread. We train twice a week, on Tuesday evenings and Saturday afternoons.”

At the moment they get anywhere between 15 and 25 on average to a training session - a fairly even mix of men and women, and at least 50% Zimbabwean.

The board of AFL Zimbabwe identifies many hurdles that they will face in developing the game, but the team continue to tackle them head-on.

Amongst the hurdles they continue to negotiate are the availability of grounds and a range of issues such as fuel shortages and economic pressures which affect many Zimbabweans' ability to commit to club needs.

When asked about the short, mid and long term planning for AFL Zimbabwe, the board had identified a number of directions either already in place or about to be.

“In terms of our plans, our short term plan is to play an international 9-a-side game against South Africa. We were contacted by a South African player last year, keen on organising a game. We are currently in discussions, though the cost of travelling for one of the teams is proving a hurdle. If we can make this game happen, we are hopeful that will provide a strong opportunity to attract people and build further momentum.”

“Beyond that, we'd ideally like to create a Harare-based 9-a-side league (full contact) for both men and women. We think we could realistically get numbers in the next 12-24 months for four men’s teams and two women’s teams.”

According to one board member at the club, “there's a huge amount of interest, at times hidden. Even tonight after our training, I ran into a ZIm guy who'd been training with the Rugby club who was wearing a Sydney Swans top. He had no idea there was an Aussie Rules team in Zimbabwe, so we've added him to our Whatsapp thread and hopefully we'll see him on the training track soon.”

Th club has identified that fitness is a big challenge, but the more people regularly train the better it gets. Skills for new players is always a challenge. Those who have played sports like rugby at a reasonable level before catch on a lot more quickly.

Their Portland Steelheads "recruit", Andre Daniel, is noted as a very handy skills coach who will often pull people aside during training to give pointers.

Ronan's partner, Natasha, is playing a big role with the women. Natasha is Swedish and played for an AFL London women’s team, giving her a good understanding of the game.

Already, the AFL Zimbabwe reach has seen a melting pot of cultural and international interest. According to the fledgling club, “the nationalities of people that have come to play include Australia, ZImbabwe, South Africa, UK, Sweden, Denmark, Russia, USA, Canada, France.”

AFL Zimbabwe have undertaken an enormous project to introduce a game with little or no following into a country where they will begin from scratch. Yet, they have already achieved a great deal in a short time and with the attitude and determination of Trystan and the board they look set to achieve a whole lot more.