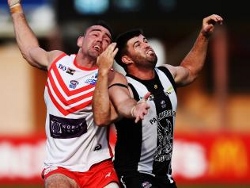 To many, the draw between Palmerston Magpies and Waratah rates as an upset. Certainly, few would have expected that the bottom team would get up and share the points with the team that has recently impressed so many. However, that is at face value. Digging a little further, there is evidence that Palmerston was due for a win – and when you are the bottom team, a win against any team higher could be seen as an upset.

But, digging into the eight defeats this year for the ‘Pies, their average losing margin is just 39 points – which is low for a bottom team. Their biggest defeat of the season was last weekend by 65 points against Nightcliff. Also, most of their defeats can be traced back to one poor quarter (or a little more) where concentration dropped and the opposition got off the chain. It suggests that any time Palmerston can put together four solid quarters they are a capable unit.

The game against Waratah never reached great heights – until the dying moments – but Palmerston were able to lead almost all day and held their nerve at the end to at least deny Waratah a last gasp victory. With winnable matches coming against the Buffaloes (twice), Bombers and Wanderers over the next six rounds, Palmerston could yet rattle home at the tail of the season.

In other matches, The Southern Districts Crocs answered another challenge against St Mary’s, running out 15-point winners. The Crocs led all day, but the Saints were never out of reach. In the end, courtesy of a six-goal hall to Wil Farrer, the Crocs held off another finals candidate and bounced back after their surprise loss to Waratah last weekend. Peter Macfarlane kicked four for Saints.

The Darwin Buffaloes were too good for the Tiwi Bombers, cruising to an important 43 point win. After a few weeks of sub-par performances, the Buffaloes had too much scoring power up forward with Darren Shillabeer kicking another eight goals and making a powerful focal point for the Buffs. The loss will sting for the Tiwi Bombers. Leading by three goals at the main break, they were over-powered in the second half in front of a home crowd.

Wanderers provided the bookends for their defeat at the hands of the Nightcliff Tigers. With the opening two goals of the match, things started well enough for the Muk Muks. But after that things turned turtle, with the Tigers slamming on 21 unanswered goals on their way to a commanding 111-point mauling of Wanderers. With twelve different goal-kickers, the Tigers were just too potent all over the field and inside 50 – a huge difference to Wanderers, which just couldn’t find cohesion inside fifty.

Like the Buffaloes a few weeks back, Wanderers are struggling to kick winning scores – averaging just over six goals a game over the last month. If they want to play finals, Wanderers need to find goals quickly.

Next weekend sees the final round before the festive season break. Palmerston will be hoping to go the next step and down the Darwin Buffaloes. The Tiwi Bombers will host an out-of-sorts Wanderers, Waratah will clash with St Mary’s in what could be a huge game, whilst the top of the table showdown will see the Southern Districts Crocs up against the Nightcliff Tigers in a game that is shaping as a grand final preview.