AFL Heads To The Top End 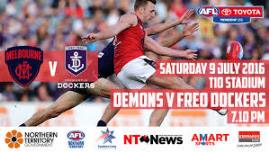 The following media release from the AFLNT details the upcoming clash in Darwin this weekend between the Melbourne Demons, part of their agreement to play matches in the Northern Territory, and the Fremantle Dockers.

The game is sure to be exciting and attract a strong local crowd. The Demons are still in the mix mathematically for finals action and a win in Darwin may see them just two games out of the eight. The Dockers have endured a horrid season but are determined to turn their season around and a win in Darwin could be the catalyst for change.

AFLNT is pleased to announce the Melbourne Football Club and the Fremantle Football Club will head to the Top End for their Round 16 Toyota AFL Premiership Season match at TIO Stadium in Darwin this Saturday 9 July.

The 2016 Toyota AFL Multicultural Round highlights the contribution different communities have made to Australian Football, while highlighting the extraordinary power the game has in uniting all people of all backgrounds.

On Friday 8 July, AFLNT will host an AFL Super Clinic that will see more than 150 local children and Melbourne Football Club players in attendance.

The journey “across the top” continues in Cairns next weekend when the Western Bulldogs host the Gold Coast Suns at Cazalys Stadium.