“Tippa” and Nyhuis Live Their Dreams 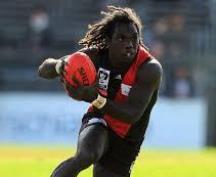 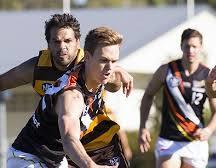 McDonald-Tipungwuti was recruited to the Essendon VFL team back in 2013 after previously being a part of the Gippsland Power team for a couple of seasons. He was also a part of the successful NT Thunder NEAFL team in 2012 and also played the 2011/12 season with his brother Ephrem and cousins Adam and Albert at the Tiwi Bombers, the NTFL team located in the town of Wurrumiyanga on Bathurst Island.

Anthony has been something of a cult hit at Essendon with his trademark dash off half back and his flowing dreadlocks trailing behind. A fitness cloud hung over him for a time but 2015 was a breakout season where he used his dash to great effect and proved to Essendon recruiters he was ready for the bigger stages of the AFL.

Ryan Nyhuis has a story that will be the envy of all future Northern Territory kids who dream of playing footy. Where both Rioli and McDonald-Tipungwuti left the Territory to play in country Victoria (Ballarat & Gippsland) to improve their chances of exposure and drafting, Nyhuis was selected straight from his club, Nightcliff, in the NTFL to be a member of the NT Thunder NEAFL team. Thunder coach, former St Kilda player Xavier Clarke sees his drafting through the Rookie program as proof that Territory kids can follow their own pathway and this concept “crushes” the adage that territory kids cannot make the AFL from home.

Fremantle took the 19 year old former NT Under 18 team captain with their pick #34 at the Rookie Draft yesterday. Just over a year ago Nyhuis was still playing club footy for Nightcliff in Darwin where he played all his junior footy. Earlier this year he was a part of the NT Thunder NEAFL premiership team, and now a place on an AFL list at Fremantle. It has been a whirlwind ride for Ryan.

The following story is a press release from the AFLNT recognising the rookie drafting of their two young guns.

NT Thunder product Ryan Nyhuis and Tiwi Islander Anthony Tipungwuti have both been picked up in today’s AFL Rookie Draft.

Both Nyhuis and Tipungwuti will join Daniel Rioli of St Mary’s who was selected by Richmond in Tuesday’s main draft at pick 15, at new clubs in 2016.

Nyhuis, who plays for the Nightcliff Football Club was selected this morning at pick 34 to the Fremantle Dockers.

AFL Northern Territory High Performance Manager Wally Gallio knows this is what can be achieved with hard work and commitment.

“Ryan focussed on Year 12 in 2014 and came back to the NT Thunder Program in 2015, he’s left nothing to chance in reaching his goal of having his name read out by an AFL Club,” Gallio said today.

Ryan’s home club, Nightcliff, is equally as thrilled for the youngster, with Vice-President Tim Scott describing Ryan’s achievement an immensely proud moment for the club.

“Ryan is a wonderful example of the success the Nightcliff Football Club is reaping through our Junior Development Program coordinated by senior coach, Damian Hale,” Scott said.

“Ryan made his debut in the Tigers Premier League team as a 17 year old and has cemented his spot as a regular first choice selection week after week.

“Not only is Ryan a champion on the field, he is a credit to his family and club off the field”.

NT Thunder Head Coach Xavier Clarke is also pleased for the young man who he describes as a player with a great attitude and willingness to learn and improve.

“Ryan was given some big roles [in team NT Thunder] in the NEAFL this year and delivered each time,” Clarke said.

Tiwi Islander and Melbourne based Anthony Tipungwuti played in the Under 18 program for the Northern Territory in 2011.

Playing mainly up front as a forward, his evasive play, tackling and great finishing skills caught eyes of the recruiters which sees him head to Essendon as pick 22 in this morning’s rookie draft.

It’s great to see the Northern Territory, not only competes against the non-traditional football states such as Queensland and NSW/ACT with the number of draftee’s this year, per capita, but also out performances more traditional states such as Western Australia and very closely competes with South Australia when it comes to draftee’s to population.