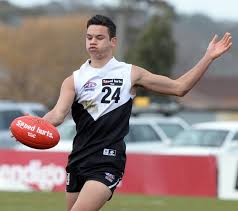 If ever you find a car in an old garage, covered in dust and blankets, but it has the legendary Rolls Royce symbol on the bonnet you just know it would be worth investing some time and effort into restoring it. After all, it is a Rolls Royce and it doesn’t have such a fine reputation for nothing. It is all class – no matter which model you might discover.

Much the same can be said for the Rioli name nowadays in Australian Rules football. Just mention the prospect of a Rioli at a national draft for player talent and suddenly talent scouts and managers become akin to Pavlov’s dogs. At the mere mention of the word “Rioli” they will all sit up on cue and salivate.

Such is the case at the 2015 NAB AFL Draft being held in Adelaide on Tuesday. Young Daniel Rioli is the next edition off the production line and he has tails and tongues wagging. Such is the value of his name alone that all clubs are likely to have pencilled him in as either a first round pick, or at worst an early second rounder. But Daniel is keen to ensure he is known, and drafted, on his own merits.
A product of Darwin based club, St Mary’s, in the Northern Territory Football league, Rioli has excited and impressed everyone from his junior days. Standing at 180 centimetres and a lightly framed 65 kilograms, Rioli has certainly held his own this year. Playing in the TAC Cup this season, he kicked four goals against the Geelong Falcons in the finals for the North Ballarat Rebels and impressed at the national Under 18 Championships. His performance in the Allies team against the NAB AFL Academy team on Grand Final morning saw him listed amongst the best players.

Rioli also ripped up the recent Draft Combine where he excelled in all disciplines, winning the repeat sprint test and going top six in most others. As a result he was named the 2XU Best Performer at the combine.

Rioli looks set to follow his illustrious cousin, Hawthorn’s Cyril Rioli, into AFL football at one of the clubs. He will continue a long line of Northern Territory footballers who have graced the game including greats like Maurice Rioli, Michael Long, Cyril and more.

But he is not the only Territorian catching the eye for this year’s draft. Davin Ferreira, formerly from the Wanderers club in Darwin, has also caught the eye. Davin played the 2015 season scattered amongst a TAC Cup match against the Murray Bushrangers where he was listed amongst the best players and representing the Northern Territory at the Under 18 Championships. He also impressed in his senior debut with Norwood in the SANFL after a sizzling streak for their reserves team. Still small and light, Ferreira is already tipped as a “smokey” for the upcoming draft. Listed as a small forward/midfielder, Ferreira is described as being fast, agile and a strong overhead mark for his size. Even if not drafted on Tuesday, look out for Ferreira as a red-hot chance at the following rookie draft later in the week. His 174 centimetre height is about the only concern for his chances, but his football has no such concerns. Some even rate him a better footballer overall than Rioli.

Another Territory product to have caught the eye is Michael Hagan. A product of the Darwin Buffaloes club, he is another player who has had certain tongues wagging after his impressive display for the Allies against the NAB/AFL Academy team back on grand final day. In a team boasting top draft prospects in Rioli and GWS prospect Matthew Kennedy as well as names like Harrison Himmelberg, Eric Hipwood, Keiran Lovell and Mitch Hibberd, Michael Hagan was listed amongst the best players on the day. Was a consistently good player at TAC Cup level for the Northern Territory team and would have caught the interested eye of recruiters.

Whilst recruiters would have used due diligence to scour the lands and leave no stones unturned, these three lads pose the greatest chance of drafting, though who could rule out the “diamond in the rough” unearthed from somewhere else in the Northern Territory. Younger players like Brandan Parfitt (Nightcliff Tigers) and Ezekiel Frank (Palmerston Magpies) have huge potential and have played representative level this year also, but are too young for the 2015 draft. They will use their experience this year to smash down the doors for the 2016 draft.

Draft night is always exciting, more so this year with the revamped bidding system and TV friendly format, and it remains to be seen which AFL clubs will boast a new Northern Territory recruit come Tuesday night. We will now wait and see which club finds themselves a Rolls Royce or similar tucked away somewhere in the garages and stables of Territory talent.