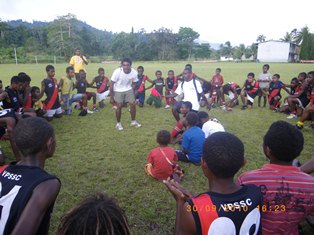 The 2010 AFLPNG Coca-Cola Junior National Championships has wrapped up in Lae with the Highlands Province taking home the coveted Championship Shield. The 3-day tournament was a concoction of great football, loud music and tremendous participation by all players, officials, families and friends. Under 13, 15 & 17 Boys and Under 15 Girls came in from four regions across PNG to participate in the championships. The Highland Raiders, The Southern Sharks, The Northern Thunder and the NGI Stingrays congregated on the lawns of Igam Barracks to battle for the championship.

Moses Kar, leader of the Highland Raiders teams was excited about the championships and the opportunity it offers the youth of PNG.“Taking the bus from Hagen, the kids were full of excitement. The championship offers these kids a chance to get out of their regions, learn some valuable lessons in life, whilst enjoying a game that can offer them every chance to build a career on”.

Asia Pacific manager Andrew Cadzow made the journey north to oversee the tournament and take an up close look at the talent on display. Selections also took place throughout the tournament for future traveling junior PNG teams. Walter Yangomina, AFLPNG Manager, highlighted the importance of performing well over the championships. “Kids from all age groups were selected throughout the championships, we had selections for the AFLPNG Academy in Bomana, kids were selected to take part in the AFLPNG Talent Camp held at the NSI in Goroka in December, we also picked the girls for the Kurukums squad. It is an exciting time for AFL football here in PNG.”

The Championship kicked off at 10:00am across two ovals within the barracks. An impressive standard of football ensured a great spectacle for the generous crowds that filled out the grandstand and surrounding tents throughout the tournament. Lightning fast running, hard hitting tackles and precise disposal sum up the standard of football issued right across the board.

For the Under 13 Boys, The NGI Stingrays displayed an aggressive, fast running style of football that saw them overcome challenges from their opposition and gain the Under 13 Boys National Championship. The best player for the Under 13 competition was Clement Ave from the Islands team. The Highland Raiders also displayed their superior strength to gain the Under 15 Boys Championship. Aggressive, strong tackling and hard ball gets are words commonly used to describe the Highlands outfit this year. Bruno Arnoud of the Highlands was voted best Under 15 player.

For the Under 17 Boys, it was the New Guinea Island Stingrays who took out the title ahead of strong opposition. The football was of top quality with free flowing football, great disposal and fast paced ball movement. In what was a delight to watch, the team spirit and sportsmanship was of a grand quality. Eddie Tagun from the Islands won the award for best of the tournament.

Girls football has also taken massive leaps forward in recent times in PNG. With the Australian Championships taking part at the end of this month, the girls put on a standard of football that will challenge the best underage girls from Australia. The Northern Thunder was the dominant team winning all three matches across the 3 day tournament. The award for best player was taken out by Jennifer Biage from the NGI Stingrays. 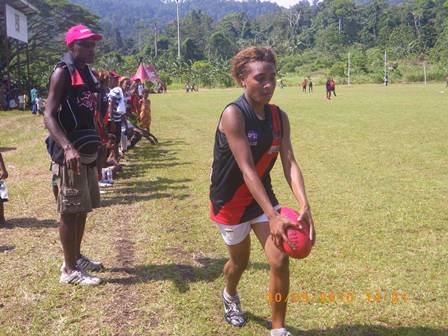 The annual AFLPNG Coca-Cola National Championship Shield is awarded annually to not only great on field performance, but to how the students behave off field, their interactions with each other, and their assistance throughout the tournament. The 2010 Shield was awarded to the Highland Raiders.

“We came with a great team, and we are happy that we have won the 2010 shield. The last few years the Northern Thunder has taken out the Shield and it has been a very strong competition, so it’s a great feeling to hold the shield for 2010”.

Overall Winning Region (On and Off Field):
Highlands