Full scores and roundup from the 2007 Asian Champs 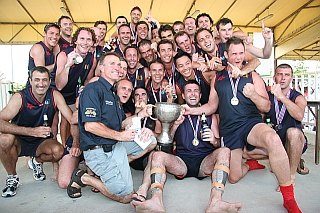 Held on the 14th of July in front of hundreds of spectators at Bangkok Patana School, the 8th Annual Asian Championships of Australian Football have been hailed a great success by all involved and once again raised the bar on the standard of footy played in Asia. The following report is courtesy of the Thailand Tigers' Asian Cup coordinator Steven Richards.

As promised, the tournament produced 21 games of high quality footy and remarkably evenly matched teams with the Hong Kong Dragons the eventual Asian Champions, downing the Bali Geckos in extra time, 6.7 (43) to 5.4 (34) in a nail-biting Grand Final - Read on for Grand Final and Ladder results.

The President of the Hong Kong Dragons, Nathan Byrne, says that the Dragons commenced preparations in April and they knew that, "...the draw was quite important to us and knowing we were taking on Singapore first, we knew we had a good chance to build some momentum.... Singapore were strong but depleted." The Dragons route to the Grand Final also saw the Malaysian Warriors "...put up a fierce battle and be hard at it", while the Japan Goannas are a "...fast running and unpredictable side". The UAE Heat match was "... in short, a hard fought victory and one of the best achievements of the club given what we were up against. They are a great side and we look forward to future battles." remarked Byrne.

Then in the Grand Final, "...Bali were their all time best again. Hard to the ball, body on body and young and quick. Somehow we came out on top but it could have gone either way. They are a great bunch of fellas and it was great to play them, but we really did feel for them and know they will be the same force in 2008."

The 2007 Championships were not only notable for the close competition, but for the high standard of skill displayed and the great spirit in which all teams played. The standard of footy has been raised with each ensuing year since the inception of the Championships, but 2007 saw an extra level reached. The UAE Heat, as first-timers to the Asian Champs, showed themselves to be a very good football side. The China Reds were an imposing presence with ex-AFL players Greg Stafford and Mark Chaffy in their line-up. The Vietnam Swans, also first-timers, led at half-time in nearly all their matches.

A huge thankyou must go to the Thailand Tigers and everyone involved for staging a stunning and hugely successful tournament. A healthy crowd was present all day, they enjoyed first-class catering provided by DownUnder Sports Bistro and legends of the Melbourne rock 'n roll scene, The Fauves, played for the crowd after the presentations. Andrew Mannering, President of the Malaysian Warriors, congratulated the Tigers and said, "Hats off to all involved in the organization, you have raised the bar yet again for the continued growth our great Australian game in the region...." The Tigers arranged for two senior grade SANFL field umpires to officiate throughout the day.

International media interest included 'ESPN Sportscenter', and 'Al Jazeera English TV', while local media interest came from 'Bangkok Post', 'The Long and the Short of It', and 'Siam Sports'. There is now a significant web presence of the Asian Champs and Asian footy in general, led admirably by the Vietnam Swans at vietnamswans.com[*1] .

GOAL OF THE TOURNAMENT - Take (Tokyo Goannas) (vs. UAE Heat)