Essendon's future leaders learn the Way of the Samurai 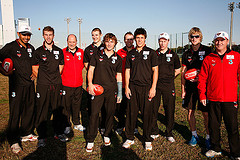 As previously reported[*1] on WFN, a 'future leadership' group of Essendon footballers conducted coaching clinics in Tokyo and Osaka earlier this month as part of a Development Trip to Japan. JAFL President Hideki Miyasaka hailed the visit a success, with the Tokyo clinic being well supported by players from the Tokyo based clubs, and the Osaka clinic also incorporating a session for women's and junior footy. Hideki also reports that Essendon showed an interest in two young Japanese Footballers, but, at this stage, have still not decided whether they will invite them to pre-season training or not.

The following rundown of both clinics is provided courtesy of Hideki and the JAFL.

On Thursday November 9, a historic training session was held at Harumi Sports Ground in Tokyo with Japan's finest Australian Rules Footballers teaching the Essendon AFL stars just how footy is played in Japan! Despite the fact that the session was held on a weekday, nearly 30 Japan AFL players, including players from University teams the Senshu Power, Komazawa Magpies and Tokyo Leopards, as well as the Eastern Hawks and expatriate Tokyo Goannas, gathered for the Essendon Training session. The Essendon Players and Coaches began the session with basic handball and kicking drills before progressing to marking and long kick drills that used the full sweep of the ground. The session then finished with a mini game in which a few of the Essendon Players, such as Jay Nash, joined in. Following the session, the Essendon FC presented a signed Essendon Jumper to Japan AFL and plenty of Essendon merchandise individually to each of the Japan AFL players. Japan AFL in return presented the Bombers with a JAFL Footy and Samurais Jumper.

In Osaka on November 12, two sessions were conducted simultaneously. One was held for the women and kids and run by Adam Ramanauskas, Jay Nash and Ricky Dyson. Nearly 100 kids and women turned out from the Osaka Bilbies Women's team and the Osaka Russells Elementary School at Ikue Elementary School ground. The women and kids received training that focused on moving the ball quickly. One drill was like a big rectangle that involved kicking on the long sides and handpassing on the short sides. At the end of the session, the players answered questions that the kids had prepared, questions like; "What`s your favorite Japanese food?" and "Why did you become a footballer?". Adam, Ricky and Jay gave detailed responses. Adam's demonstration of the difference between Australian and American football was a particular favourite. Before leaving, the three players presented the kids and women with Essendon goods, signed a lot of t-shirts and posed for plenty of photos. In return, the women and kids all signed an Osaka Dingoes jumper and presented it to the 3 players.

Both the training sessions in Tokyo and Osaka proved to be great successes. It was a wonderful experience for the JAFL players to be coached by the Essendon Players. Following the trip, Essendon and the Japan AFL remain committed to working together to build Australian Rules Football in Japan with Essendon maintaining an interest in inviting talented Japanese Footballers to pre-season training as per Michito Sakaki and Tsuyoshi Kase last year.

Editor: Note that although the coaching clinics were successful, the Nippon AFL, which is not aligned with the Japan AFL, have told WFN that they were excluded from a clinc by the JAFL withholding details, allegedly to Essendon's subsequent displeasure. We have not as yet been able to verify this statement from the Essendon FC. 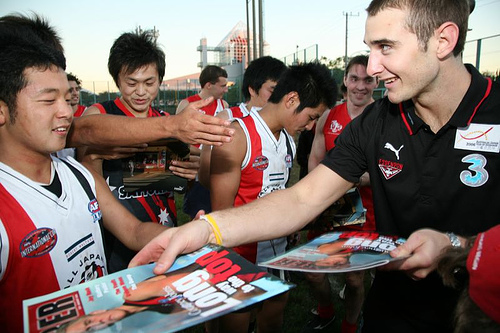 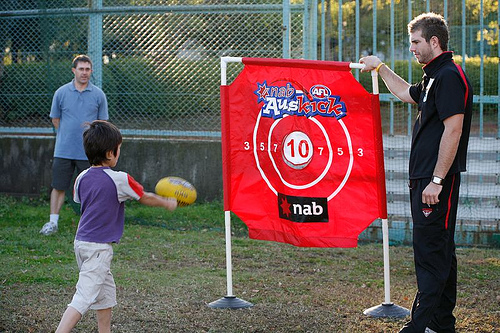