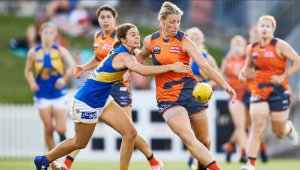 Aishiling Sheridan, #14, started in the forward line for Collingwood. In the 11th minute, a ball kicked by Jaimee Lambert bounced into the square where it was picked up by Sheridan, who kicked the opening goal with a quick left-footed jab at the ball. Later in the fourth quarter, when the ball hit the ground in front of Sheridan, she soccered the ball, finding Chloe Molloy open in front of the goal and sealing the win against the Roos. Sheridan’s creativity and attack on the ball has been huge in helping Collingwood find the goal this season. She finished the game with 1 goal, 1 behind, 2 tackles, and 9 disposals.

Sara Rowe, #7, had another scoreless game, but plenty of good support for her team and unrewarded running. Unfortunately her two highlights were of her playing on off the mark, and getting tackled by North for turnovers. Usually a successful move with her speed, North’s read of the play and pressure was too strong for her to find advantage with the play on.  She did finish the game with 14 disposals for her team’s advantage, half of which were kicks and half off the hands. It was a night where she looked more comfortable with the hands than the boot, and her hand balls proved more dangerous for her team.

Aileen Gilroy, #8, was under constant pressure, spending time lined up on both Chloe Molloy, #2 on Collingwood, and Sheridan. She made four tackles and six disposals, all big kicks, which comes as no surprise. But Sheridan and Molloy were better off the ground on the day and North, as a team looked unstructured, so getting support on defense and good opportunities to move the ball out was difficult. She did have good composure when providing options for her fellow defenders under pressure, often presenting for a handball option out the back.

Ailish Considine, #16, remains out after her concussion in Round 3. News has her back at training and working back into contact, so hopefully a smooth recovery and we see her on the field again soon.

Orla O’Dwyer, #9, had a best-on-ground performance against a tough Adelaide Crows on Sunday. She ran hard to provide support offensively and defensively on the wing, and often in the center of the field. With the highest tackle count on her team and the field for the day, she had several key tackles which helped keep Brisbane in the game. Her pressure was outstanding, and she was able to deliver the ball to her forward line. Among the highest in kicks and disposals as well, she took her game up a notch this weekend. Beyond her stats, it is her work ethic off the ball to get to the most effective positions that gave her opportunities to impact the play and the game.

Dani Marshall, #26, was back for the Western Bulldogs, rotating into the front line for the first time this season. While she didn’t rack up possession numbers, her attack on the play was good. Demonstrated in the second half, when a ball kicked over the top didn’t take an expected bounce, leaving her with a 3-1 situation in the forward line. Marshall attacked the play hard and kept the ball in a dangerous position, directing leading to a goal for the Dogs during a crucial part of the game. She ended the game with three disposals, a mark, and three tackles.

Sinead Goldrick, #23, was sorely missed by the Demons, but out this round due to a head knock late in the previous game against North Melbourne.

Niamh McEvoy, #17, started in the interchange and rotated into the forward line in her seventh game for Melbourne. She had another solid game with good pressure on the forward line, ending the game with four tackles. In the first quarter, after a few good attacks at the ball, and in one play stripped the ball from Issy Grant’s hands and handballed to a Demon up the field for a goal opportunity. With good attack on the ball and courage going up for some marks, she seems to be getting better week after week.

Lauren Magee, #26, played her debut game for Melbourne Demons on Sunday. She started in the interchange and rotated into defense, often marking Marshall of the Western Bulldogs. She made a good run for a fellow defender under pressure, who unfortunately missed her with the handball. Magee, turned with speed and made an effort at the ball, unfortunately managed to grab Kirsten McLeod in the process and gave up a free, which turned into the Doggies first goal. Put in a bad position, she attacked the ball hard and the play just didn’t go her way. Throughout the rest of the game, Magee did well to stay on her player, but just didn’t see much of the ball. Her one disposal was a 50 meter kick for her team’s advantage. After only three weeks with the team, it is huge to make her debut. It was only her second AFL game ever, as she was able to see a practice match with the VFLW side.

Cora Stuanton, #13, is no longer searching for that first goal this season. Sunday she reminded fans why she is the leading goal kicker for the GWS Giants AFLW team by slotting 4 goals and 2 behinds against the Eagles. 26 points,  just two points shy of the Eagle’s final score. Still at full-forward, she had a best-on-ground performance and was named Giants Player of the Game, with a career high of 16 disposals.  Goal one came in the opening minute, with a kick to the center Staunton picked up, turning right was blocked so she turned to the left and kicked a bouncing ball that dribbled through traffic and the big sticks for her first goal of the season. Goal two came less than two minutes later, when a teammate was given a push in the back, so the entire field stopped, but Staunton played advantage and kicked the goal. Goal three came in the fourth quarter and was an off-the-ground, soccer goal through a pack in the hot spot. Goal four was set shot after an open lead gave her a mark at about 35-40 meters out. Running from the fifty, she kicked a long curving ball for a goal, making it look easy.  All four goals were different and smart play. This was a game where her physicality, read of the game, and hard-at-the ball play had an advantage. Eagles’ defended her with a tall intercept marking defender, who’s advantage seemed to be in-the-air. Staunton was able to bring play to the ground and move to create opportunities for her team.

Niamh Kelly, #12, still missed by the Eagles after her finger injury. Have yet to see any word on when to expect her back.

Aisling McCarthy, #11, had another best-on performance in the center for the Eagles, and rotated into the forward line when she needed a rest. She may not have scored any goals of her own boot, but she created them through her hard work, team efforts on the field, and creativity with the ball. Up in the forward line, she provided an excellent supporting run and shepherd to make Parris Lauries’ goal mostly uncontested. She knew when to tap onto a teammate, and when to pick up, and never shied away from contact. A scary moment in the fourth quarter when McCarthy went down with a knee injury, but the coach mentioned it looked worse than it was and did not appear to be structural, so hopefully we see her on the field again for round 5.

Grace Kelly, #15, was in the forward line again providing support outside the contests for her team. She provided pressure on the ball, just couldn’t manage to pick one up for a goal. She did have 7 disposals, 2 marks, and 1 tackle in the forward line. With her marks she played on, trying to use her speed to create opportunities for her team, but it just didn’t work out for her this game.