Changes to the configuration of elite women’s football in Victoria will for the first time see a full talent pathway program with the NAB League Girls, VFLW and AFLW competitions being played at the same time.

Ahead of Round 1 of the 2020 VFLW season this weekend we take a look at the international players that have landed list spots of five clubs.  In an open border situation with no Covid-19 issues, we could have expected more international talent in the VFLW.  Players such as April Lewis, Clara Fitzpatrick, Erin McLaughlin, and Jess Blecher are just a few who were on VFLW lists in 2019 who are not back in Melbourne to play.

Kendra Heil was drafted by Collingwood for the first AFLW season in 2017. Kendra never got to play in that competition after a knee injury, her second ACL tear saw her miss the season and then be delisted.  But Kendra has plenty of footy under her belt. After first playing with the Hamilton Wildcats in Canada back in 2012, she debuted for the Canadian International side that same year. In 2014, she was a part of the Northern Lights team that won the International Cup in Melbourne and moved to Australia, playing for the Eastern Devils in the VWFL.

She did her first ACL in 2015, then recovered to be drafted by Collingwood and missed out on another year for the second ACL. Finally, in 2018 she joined the Essendon VFL team and was selected as part of the 2019 leadership group, eventually earning runner-up Best and Fairest at the club. She returns to Essendon in 2021 as part of the leadership group again.

Theresia Meißner is the first German National to sign onto a VFLW side, and picked up footy in 2018 playing for the Hamburg Dockers in the AFL Germany competition.  Moving to Melbourne to further her footy she trained with Darebin and Aberfeldie in the Essendon District Football League, lived with AFLW player Dani Marshall and eventually committed to the Western Bulldogs VFLW team in 2020.

Now after moving to the Western District for work, she finds herself signed with the Geelong VFLW side. A strong body on the ball and known for her fitness, Meissner has been seeing a lot of the midfield during the practice games, and we expect to see her there throughout the VFLW season.

Two names familiar to the Saints fans will be lining up again for the Southern Saints in Valerie Moreau and Frankie Hocking.  Moreau has been around the VFLW system since 2018.  Moreau played for the Canada Northern Lights at IC17 after starting her footy with the Montreal Angels in the AFL Quebec competition.

The pocket rocket midfielder moved to Australia to further her football and played with the Eastern Devils in the VWFL and participated in the Victorian Academy. In 2018 she signed with Essendon in the VFL and in 2019 moved to the Southern Saints. In her first game wearing the Saints’ jumper, she tore her ACL and spent the rest of 2019 rehabbing and supporting the club. She also has had a support role with St Kilda’s AFLW team during her time at the Saints.

Frankie Hocking (pictured below) was a solid defender for the Saints in the 2018 and 2019 VFLW seasons.  Her footy career began in Sydney playing with the Newtown Breakaways and the Englishwoman represented the GB Swans at IC17. In 2018, she participated in the AFL Women’s International Rookie Camp. This year, Hocking has been named co-captain along with Deanna Jolliffe and Tara Bohanna.

One name not so familiar to the Southern Saints followers is Nicole Robertson.  Another Canadian, Robertson started her footy at the Calgary Kookaburras in 2015, and also represented Canada at the IC17 tournament.  We expect to see Robertson up forward for the Saints when she makes her VFLW debut this season.

Aisling Curley also joined the Saints for 2021. Curley hails from Ireland where she has an extensive background in Gaelic football. She started her AFLW career with CrossCoders in 2018 and committed to Collingwood’s VFLW side, where she won a flag in 2019. She was committed to returning to the Collingwood midfield in 2020, but as we all know that season was cancelled. She will be a strong addition to the Southern Saints midfield.

Katie Stone is an American who began her footy career in the UK.  Playing for Oxford Uni and then for the North London Lions the 6’3” ruck has been on a footy journey in Australia.  In 2019 she played two games for Carlton in the VFLW along with VAFA footy at Fitzroy.  In 2020 Stone was all set to play with the Darebin Falcons before the season was cancelled.  Katie was also selected to play for the US Freedom team at the 2020 International Cup on the Sunshine Coast, but this was delayed until at least 2022.  In 2021 Stone finds herself on the Western Bulldogs where she should add value to their ruck stocks.

Williamstown is playing their third season in the women’s comp and the standalone VFL club has named a trio of Irish players on their list.  Amanda Maginn was part of the victorious Irish Banshees at the 2017 International Cup and the CrossCoders camp in 2018.  A cross-coder with rugby experience she should add a hard edge to the Seagulls. Lisa Loughnane is another crosscoder from camogie, a traditionally physical sport, so should be able to use that attacking style of play, quick paced game, and body-work to transition smoothly into the footy world.  Claire Ryan is another Irish woman with experience in the Gaelic sports trying her hand at the Aussie code.  With injury clouds over these two, a round 1 debut seems unlikely.

How the season will play out

Round One will commence on Saturday February 27 when North Melbourne host newcomers Port Melbourne at Arden Street from 10am. Other key round one matches include the reigning premiers Collingwood travelling to Deakin University to play Geelong while Essendon will host the Southern Saints for the first time at The Hangar, Tullamarine on Sunday February 28.

A first for both VFLW and AFLW will be both competitions played alongside one another, allowing players not selected in their AFLW sides to play for their VFLW-aligned sides from February to April.  With AFLW players able to play (with number limitations) we expect that we will see some of the Victorian based internationals having a run in the VFLW when they are not selected in the AFLW team that weekend.

AFL Head of Talent Pathways and State League Competitions Tristan Salter welcomed rebel to the VFLW highlighting the clear alignment between VFLW and rebel in its commitment to the sustainability, diversity, and development of female athletes.

“The quality and standard of the rebel VFLW Competition continues to elevate each year. Despite not playing football for almost 12 months, all clubs, players and coaches are ready for a big year of football.”

“rebel shares a commitment to developing female athletes across Australia and we are delighted to strengthen this commitment throughout Victoria by bringing rebel on as the naming rights partner of the rebel VFLW competition.”

“The 2021 fixture will allow great exposure for the next wave of talent and will provide fans across Victoria the opportunity to get close to the action with clubs and players maintaining a great connection to their communities. The alignment with the AFL Women’s and NAB League Girls fixtures will see the best girls across Victoria play competitive football matches every weekend,” Salter said.

“These continue to be unprecedented times and the fixture this year will continue to respond to and reflect the situation across country. We will continue to remain adaptable as we listen to and work closely with each stakeholder to ensure the best possible outcome for everyone in the game.”

“On behalf of the AFL, I want to thank all clubs, players and the AFLPA, umpires, venues, governments and our broadcast and commercial partners for their understanding and continued support of the rebel VFL Women’s Competition.” 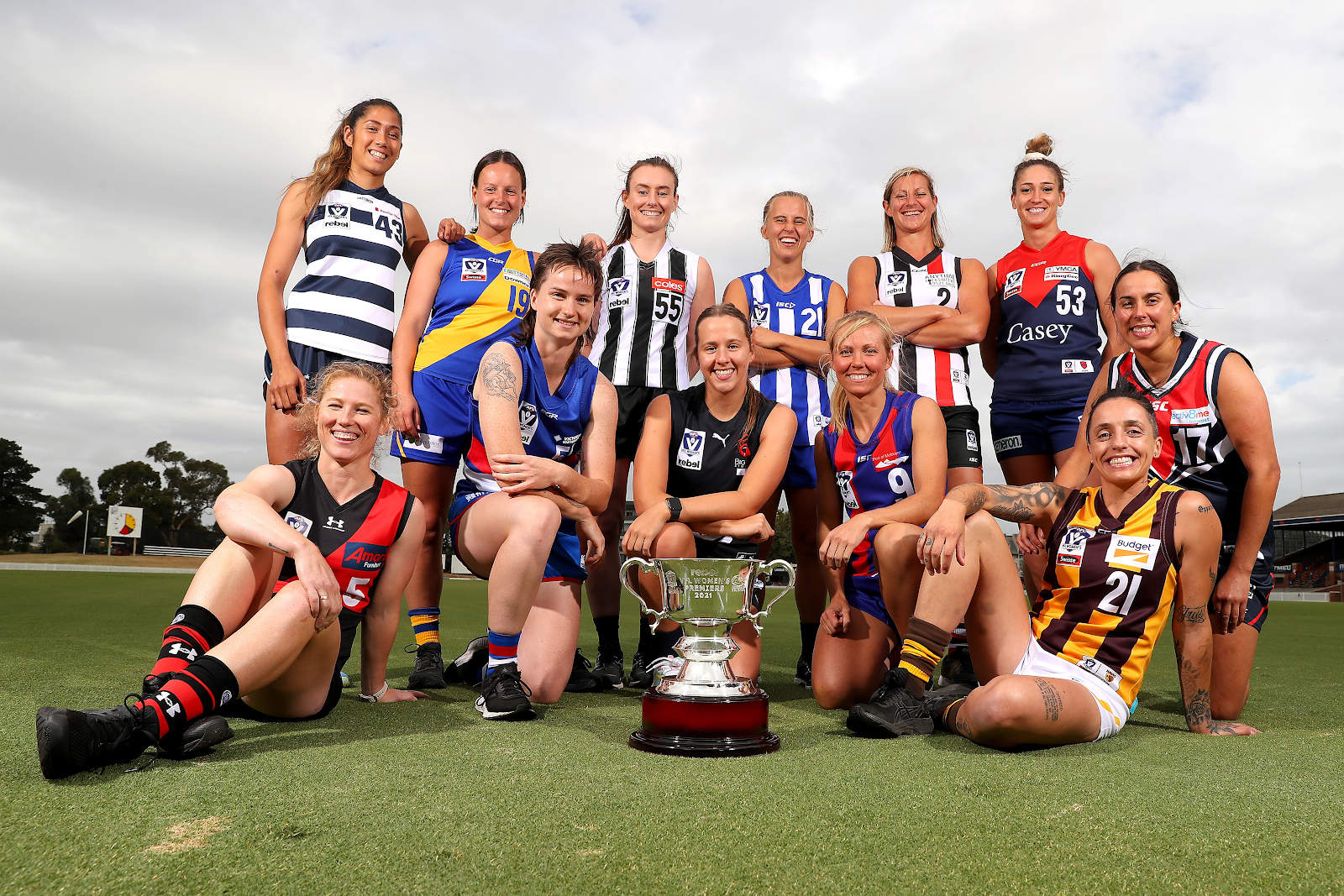 Quarter length will be 20-minute flat quarters with time-on added in exceptional circumstances.

The Lambert-Pearce medal will be awarded to the leagues best and fairest at the conclusion of the season. Previous winners include AFLW captains Daisy Pearce and Katie Brennan.

Given the shared resources at many AFLW and VFLW clubs, the league would continue to take the advice of the Victorian Government and health officials as well as link in with the AFLW fixture as it worked through fixtures for upcoming rounds.

The timeslots for the next block of matches will be released once the 2021 rebel VFLW Premiership Season begins.

Crowds will be permitted at all matches in Round One unless otherwise advised. Matches will be streamed through the VFLW digital channels.

While COVID-19 continues to impact the community, the health and welfare of our players and the community remains the priority and all matches will operate in a safe manner anchored in the advice of respective governments, public health officials and medical experts.

Strict protocols will be in place to protect players, officials, staff and the wider public at all matches. Spectators are allowed to attend matches but limited crowd capacity will be enforced at all venues.

(Additional reporting for this article by Troy Thompson)

For the purposes of this article we treat players that have not spent time in Australia as children/teenagers and playing the game as per the IC rules as Internationals.  Have we missed any internationalsω if so let us know!