Round 4 AFLW Wrap Up 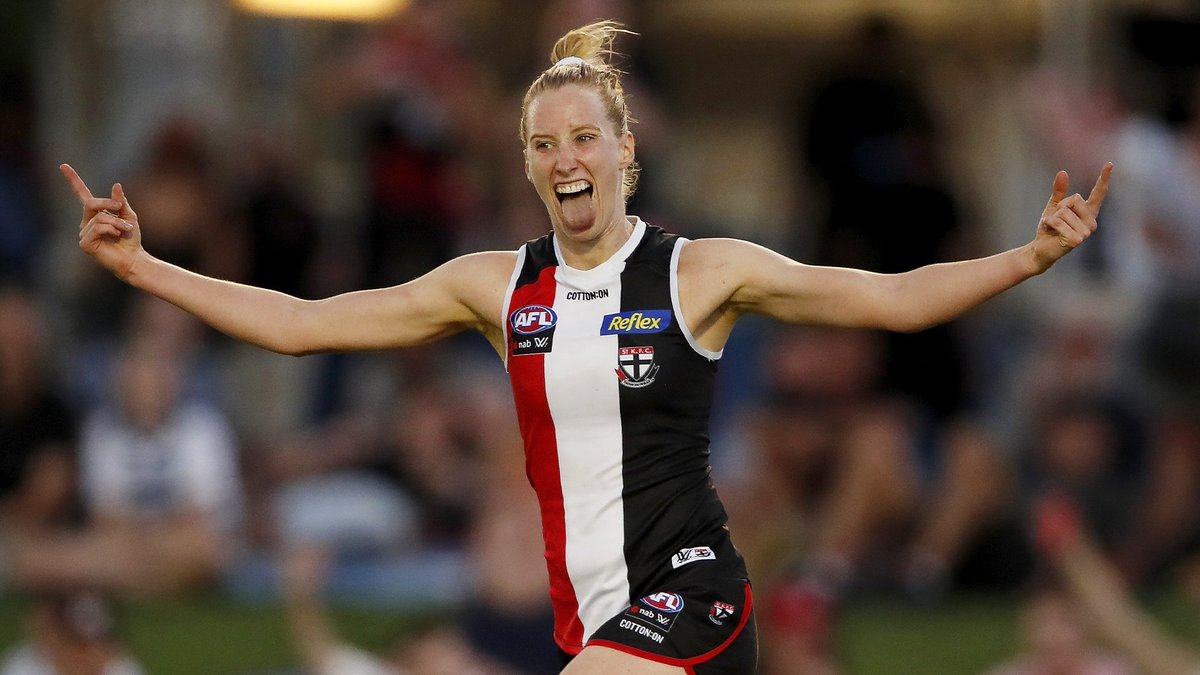 After round four, only Fremantle and Collingwood remain undefeated.

Collingwood showed the rest of the competition that they are a strong premiership threat after they made light work of North Melbourne.

For the first time in Collingwood's AFLW history, they have had a 4-0 start to the season.

The match of the round was the Brisbane Lions and the Adelaide Crows, the match went down to the wire and Erin Phillips at 35-years-old showed us why she is the best with four goals.

Phillips proved the diference in the match, as the Lions were unable to stop her impact in the contest.

An entertaining match and a match where the Crows were determined to show that they are still a force to be reckoned with after their reality check last week at the hands of the Dockers.

St Kilda outclassed Geelong after a solid third quarter to win by 29-points at RSEA Park on Friday night.

It was a much needed victory for the Saints, as it keeps them in touch with the top eight in the NAB AFL Women's competiiton.

Not much separated the two sides on the scoreboard in the first half with less than a goal, until the third quarter when the Saints came out guns blazing with three goals and kept the Cats scoreless.

They had nine scoring shots and turned a one-point deficit into a 25-point advantage.

Saints key forward Caitlin Greiser dominated with three goals, kicking two majors in the third term and one goal in the final term before the Cats managed to put through two goals to help take some confidence into the next round.

Tyanna Smith and Georgia Patrikios were both on fire.

Smith had 16 disposals, 13 tackles and 12 kicks and Patrikios continued her terrific start to this season with 17 disposals, 10 kicks and two tackles.

Patrikios, so far this season has averaged 22 disposals.

After the opening four rounds, the Cats remain winless and are at the bottom of the ladder and the Saints have a 2-2 record and their season is well and truly alive.

After a tough opening four rounds, the Cats will be determined to finally get a win in 2021 against the Tigers at GMHBA Stadium on Friday night and the Saints will have their work cut out for them when they play the Crows at Norwood Oval on Sunday afternoon.

In a nail-biter at Ikon Park Richmond kept on coming, but Carlton held on to get their second straight victory by five points on Saturday afternoon.

It is more heartbreak for the Tigers who came out with intent in the opening quarter scoring three goals, as they kept the Blues to two points at quarter time.

After quarter time, the Blues led at every change but were challenged by a valiant Tigers side led by skipper Katie Brennan.

Darcy Vescio was integral for the Blues kicking three goals from nine disposals and Maddi Prespakis was stellar with 19 disposals, five tackles and two goals.

While for the Tigers, veteran Courtney Wakefield scored three goals along with Brennan and Tayla Stahl who kicked two goals each.

Despite, the Tigers' strong performances the last two rounds they are still yet to win in 2021 and the Blues keep their premiership hopes alive this season.

The Tigers will look to get their first win on the board when they come up against fellow struggler the Cats at GMHBA Stadium on Friday night, while the Blues will travel to Hobart to play North at University of Tasmania on Saturday night.

Fremantle registered their 11th victory in a row, as they destroyed Gold Coast by 49-points at Fremantle Oval on Saturday.

They were far from their absolute best for parts of the game, as they were scoreless after quarter time and kept to a goal at the main break.

But, the Dockers showed why they are well and truly the team to beat in 2021, overcoming a slow start to kick the last six goals of the match.

Dockers superstar Kiara Bowers was massive with 17 disposals and laid a huge 15 tackles, while Gabby O'Sullivan was the only multiple goal scorer in the match with two goals from 16 disposals.

For the Suns, Jamie Stanton tried all match and finished with 18 disposals (67 percent efficiency), 12 kicks and five tackles.

Next round, the Suns will face the Eagles at Mineral Resources Park on Sunday afternoon and the Dockers will come up fellow premiership contender the Lions at Fremantle Oval on Saturday afternoon.

Collingwood are a flag contender after an impressive 20-point win over North Melbourne at Marvel Stadium on Saturday night.

The Pies were in complete control of the match and North could not play the way they could only managing eight behinds.

It has been a dissapointing last two weeks from North, a team that many thought would be the team to beat in 2021.

Molloy showed why she is a star of the competition with her magic and footy smarts when needed throughout the match.

Brianna Davey continued her strong season form with 31 disposals (71 percent efficency) and she averages a huge 24 disposals from the opening four rounds.

The Pies will next week go up against a determined Dees side at Victoria Park on Sunday afternoon, while North will hope to get back on the winning list when they host the Blues at the University of Tasmania Stadium on Saturday night.

Brisbane Lions went down for the first time this season to the Adelaide Crows by 12-points at Hickey Park on Sunday afternoon.

After a tough loss last week, the Crows bounced back in fine fashion led by the phenomenal Phillips.

Phillips' dominance in the match could not be stopped by the Lions, as she nailed through four goals and 21 disposals (66 percent efficiency).

In round five, the Lions will travel to Perth to play against the undefeated Dockers at Fremantle Oval on Saturday twilight and the Crows will host the Saints at Norwood Oval on Sunday afternoon.

An Irish masterclass from Cora Staunton steered the GWS Giants to a 20-point win over a resilient West Coast at Blacktown International Sportspark on Sunday afternoon.

Staunton was the star of the match with four goals and her performance helped the Giants to keep them in touch with the top six winning 7.6 (48) to 4.4 (28).

The win for the Giants, means that the Eagles still remain without a win this season.

It was a high scoring opening term from both teams combining for a total of seven goals.

It looked like it would continue into the next three quarters but only four combined goals were scored for the rest of the match.

Next round, the Giants will travel to Melbourne to play the Dogs at Whitten Oval on Saturday afternoon, while the Eagles will host the Suns at the Mineral Resources Park on Sunday afternoon.