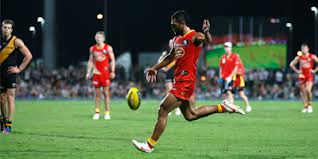 An article surfaced last week which revisited the years Karmichael Hunt spent with the Gold Coast Suns. It was an era when glitz and glamour reappeared in a strange way – almost akin to the Geoffrey Edelsten days at the Sydney Swans – when the Gold Coast Suns announced Karmichael Hunt as their cross-coding marquee player and the GWS Giants joined the party with Israel Folau.

In an article that is sure to reignite the argument of which code is tougher – Australian Rules footy or Rugby League – the Fox Footy article saw Hunt in a reflective mood about many things.

As for his decision, Hunt is quoted as saying, “the switch from rugby league to AFL delivered “everything I asked for” – but revealing it left him “pretty broken” physically.” That is a big statement coming after his time with the Brisbane Broncos in a code described by many as the toughest of them all (Rugby League).

In the Fox Footy article by Zac Rayson, Hunt offered many reasons for his statement.

“Fundamentals are key in any sport. Heading over to a kicking-dominant league with quite a different kicking style to what I was used to growing up (was tough).”

“I was used to the around the corner, traditional rugby kind of kick. Obviously AFL’s straight through, using both sides of the body.”

“Passing’s a little different (too). The nuances of the fundamental skills were difficult to adjust to. You add on top of that the game flow and strategies – it was all very difficult.”

“If I have to choose what was the most difficult, it would have to be the running load,” he said.

“You go from six kilometres in rugby and league – mind you that’s high speed – but you double that in certain (AFL) positions. Sometimes you run 17 kilometres if you’re a ruckman. Athletically it’s a huge demand!”

“It was pretty difficult on the mental space and definitely the physical space. Going from AFL to rugby, my body was broken down. The ratio between kilometres during games and during the training week – it’s almost double in the AFL.

“Going back to rugby I was pretty broken.”

It is a fascinating account from Hunt about his time playing in the AFL. Despite his 147 games of Rugby League for the Broncos, Maroons and Kangaroos, and 86 games of Rugby Union at national and international level, it is perhaps his 44 games for the Gold Coast Suns that remain the most controversial. The biggest question being whether the experiment was worth it for the Suns.

The answer to that question most likely lies in the way his short AFL career – four seasons from 2011 to 2014 – impacted people in more individual, specific ways.

Born in New Zealand to parents from both Samoa and the Cook Islands, Hunt is an AFL success story in terms of his value as a Multicultural Ambassador for the game. In this role, unseen by most of the sporting public, Hunt promoted the game through schools and overseas. A large chunk of his AFL salary was earmarked for exactly that purpose, above and beyond playing. During his time in the role, Hunt became the face of the game across many Oceania countries, with many kids believing they could maybe emulate his career.

However, in 2012, Hunt hit his straps for some very handy games. He gained 20 possessions against Brisbane, 16 against North Melbourne and is famously remembered for his goal after the siren in Cairns for the Suns to steal the game from Richmond. He only kicked six career goals, but every kid wants to kick one as he did that day at Cazalys – the winning goal. Standing directly behind him as he kicked that day, I saw someone with the poise and skill of any elite AFL player.

Despite plenty of negative press, Hunt had some love from AFL coaches. After his game against North Melbourne, coach Brad Scott said of Hunt, “"Anyone who has criticised Karmichael Hunt over the journey should be eating their words and should be apologizing to him because, on that performance, he's a bona fide AFL midfielder."

Kevin Sheedy, no less, stated that instead of sending his GWS taggers to the rampant Gary Ablett, he would instead tag Hunt. That is high praise.

In a game against Essendon he also captured plenty of attention when he hammered Bomber forward Angus Monfries in a perfectly legal, textbook, yet frightening tackle.

It was these acts which I know that I highlighted to the kids I coached, especially those who played Rugby League. In trying to get these kids to bring their gifts to Aussie Rules, the positive deeds of Karmichael Hunt could be used to get these kids believing that if Hunt could cross codes, so could they.

Nobody is in a position to argue just how successful my highlighting of Hunt was to kids I coached and lured to the game. Israel Folau also got attention, but Hunt was the one who looked like a big career was coming. I can’t name them for privacy reasons, but there were at least six kids that came to play for me hoping to be like Karmichael Hunt.

Sadly, injuries over his remaining two seasons with the Suns cruelled his chances and he returned to Rugby Union for the 2015 season, playing Super Rugby with the Queensland Reds.

Hunt’s days as an AFL player and ambassador were over, but his legacy wasn’t. Two boys who came over to play footy for me in 2013, inspired in part by Karmichael Hunt, went on to play in my local club’s maiden reserve grade premiership in 2018 at Pyramid Power. Yes, it’s a somewhat tenuous link, but it is real. As real as Hunt’s match-winning goal up here in Cairns – just ask Richmond.

Thank-you, Karmichael, for the contribution you did make to our great game – and for proving CONCLUSIVELY that Aussie Rules is tougher than Rugby League. (Mind you, privately we already knew that!)

To read the while story by Zac Rayson at Fox Footy, go to: https://www.foxsports.com.au/afl/afl-...012afb7aa1