Round 6 AFLW Wrap Up: 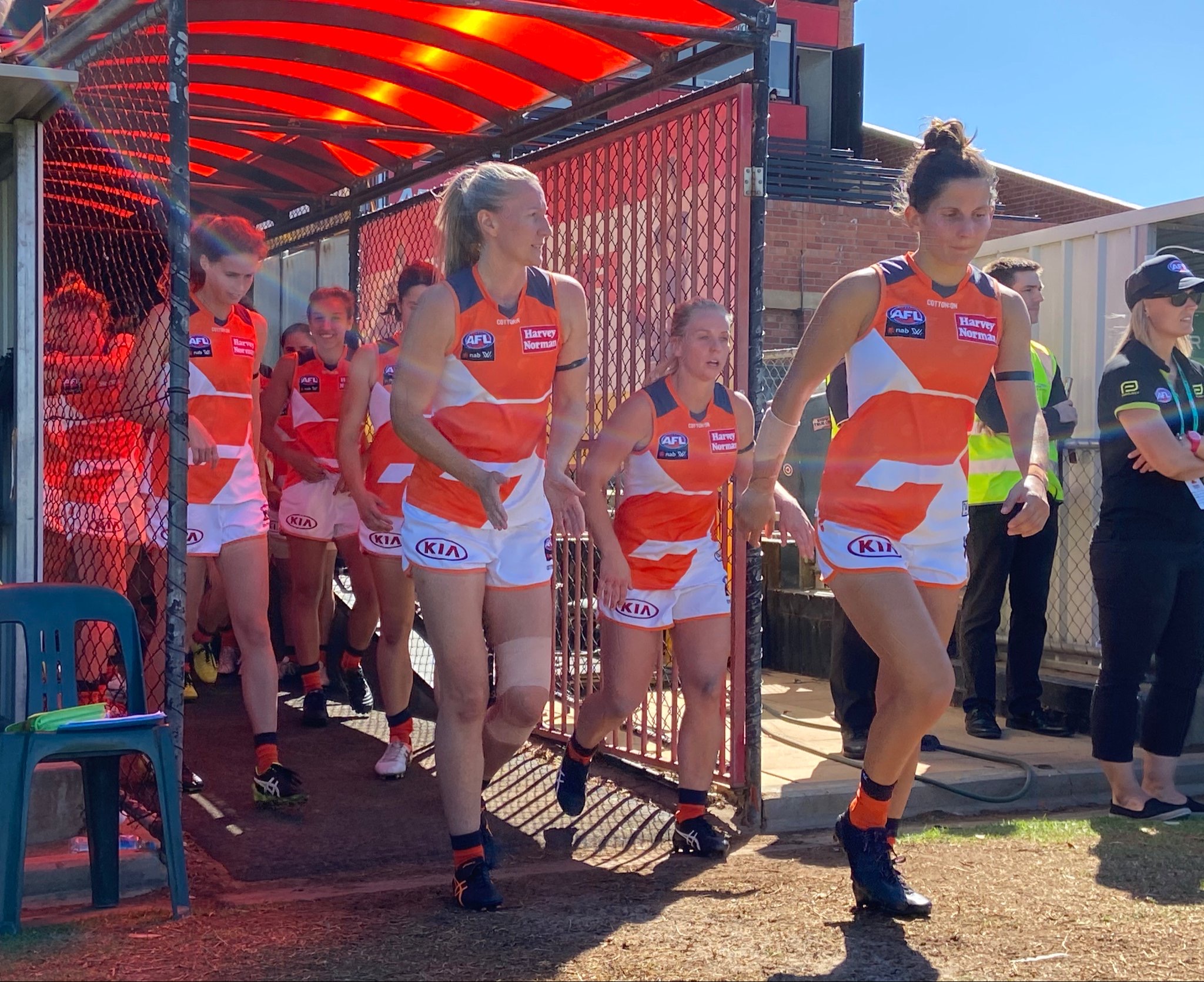 What a strange round of women's footy, round 6 was.

It was a round like no other and something we would likely never experience again in the AFLW, due to the Coronavirus pandemic currently taking over the world.

The round started with Geelong and North Melbourne being the last match to play in front of a crowd with the remaining six matches played with no crowds.

Also, Richmond recorded the lowest ever AFLW score of 0.3 (3), whereas the result from the Western Bulldogs and Fremantle match of 10.6 (66) to 8.3 (51) set the highest aggregate score record between two AFLW teams.

The Dogs and Dockers match was one of the most exciting games in the AFLW history.

With the finals two rounds away, North Melbourne, GWS and Fremantle have cemented a finals spot, while Carlton, Collingwood and Melbourne are vying for the remaining finals spots up for grabs.

A slow goalless opening term from North Melbourne did not stop them, as they kicked eight unanswered goals to storm past Geelong by 46-points on Friday night at GMHBA Stadium.

The Cats led by 11-points at quarter time and then by five points at the main break, they kept up with the premiership favourites North Melbourne and were looking the goods.

However all of this changed after the half time break for North Melbourne.

They took the game up a level with their intensity and pressure in and around the contest and the Cats had no answers to counteract the momentum shown with the flurry of goals scored.

The loss for Geelong means they most likely will not feature in the finals this season with a record of (2-3) and they sit fifth on the Conference A ladder.

It is the second time in two AFLW seasons that the 2018 No.1 draft pick has injured her ACL and it is dissapointing for her, as she was starting to play with the star talent that we all know she is capable of.

Morrison's injury happened when she was tackled while trying to kick, but her knee sadly buckled.

Jasmine Garner was sensational for North Melbourne with her ability to find space up forward to score and her forward pressure, she finished with three goals from 18 disposals and six tackles, while Ash Riddell was massive in the midfield with 23 disposals and seven tackles.

Cat Renee Garing was solid with her tackling accumulating nine tackles and Julia Crockett-Grills tried hard all match finishing with 12 disposals, five tackles and a goal.

North Melbourne will host the Western Bulldogs on Saturday afternoon at 3:10pm at Arden Street Oval and the Cats will travel to Sydney to play against GWS Giants on Saturday twilight at 5:10pm at Giants Stadium.

Pies thrashed Lions by 29-points on Saturday afternoon at Hickey Park in the first AFLW match played with no crowd, as a precaution of the coronavirus spreading.

The victory for the Pies means they are still one of the teams contending for finals in a close Conference B.

It was all the Pies from the onset, as their strength, quickness and polish all over the ground could not be stopped by the Lions and that's why they were victorious 5.13 (43) to 2.2 (14).

For the Pies, Brittany Bonnici was brilliant through the middle notching up 26 disposals (match-high) and eight of which were accumulated in the opening term.

Brianna Davey was also huge for the Pies with 22 disposals and three tackles, while Jaimee Lambert was hard as nails with a equal game-high six tackles along with her 16 disposals.

Despite her goal kicking inaccuracy of 1.4, Sarah D'Arcy was pivotal up forward due to her pressure.

In the first five minutes of the opening term, ruckwoman Sharni Layton dislocated her finger and did not return to the match.

For the Lions, Jessy Keeffe injured her ankle.

The Pies will host the confident new kids on the block, the Saints on Sunday night at 6:10pm at Victoria Park and the Lions will play away against Richmond on Friday twilight at 5:45pm at Ikon Park.

St Kilda proved too strong for Richmond, thrashing them by a whopping 39-points on Saturday twilight at RSEA Park and it adds to the anguish of an already dark inaugural AFLW season for Richmond.

The Tigers were kept to the lowest ever AFLW score of three behinds surpassing West Coast from round five this season and Geelong's seven points from the preliminary final in 2019.

It was the Saints second win in an impressive first AFLW season for the club.

The Saints were on from the start of the match, as they held the Tigers scoreless in the opening term while they scored two goals and then in the next three quarters they kicked the next four goals in the match to runout winners 6.6. (42) to 0.3 (3).

Saints' Caitlin Greiser was pivotal in the forward line contributing three goals, while Rosie Dillon was the one applying the energy and pressure in the middle of the ground with 18 disposals and seven tackles.

Tigers' star Monique Conti continued her strong season form with 22 disposals and four tackles, but she had very few helpers.

The Saints to play the Pies away on Sunday night at 6:10pm at Victoria Park, while the Tigers will host the Lions on Friday night at 5:45pm at Ikon Park.

Fremantle steamrolled the Western Bulldogs in an impressive last term to run over the top by 15-points on Sunday afternoon at Victoria University Whitten Oval.

Less than a goal separated the two sides in the opening three quarters until the Dockers turned the game on its head to ensure they cemented top spot in Conference B.

The Dogs kicked three goals to the Dockers two in the third quarter and held a three point lead at three quarter time, but the switch was flicked in the Dockers favour with them kicking four goals to one to win 10.6 (66) to 8.3 (51).

For the Dockers, duo Kiara Bowers (21 touches and 12 tackles) and Ebony Antonio (19 disposals, 10 tackles and a goal) were massive.

Irishwoman Aisling McCarthy played an exceptional match for the Dogs collecting 18 disposals, nine tackles and a goal in her best match of the season, while Ellie Blackburn (2) and Kirsten McLeod (2) combined with four goals.

Next week, the Dogs will play away to North on Saturday afternoon at 3:10pm at Arden Street Oval and the Dockers to host the Dees on Sunday afternoon at 4:10pm at Fremantle Oval.

GWS Giants pulled off a tough win over the reigning premier by five points on Sunday afternoon at Hisense Stadium.

The win helped the Giants to achieve a couple of milestones including defeating the Crows for the first time in its women's team history and will definitely be there come finals time with a (4-1) record and sitting second in Conference A.

All match, less than a goal separated the two sides in a close highly contested contest with the Crows ahead (87-86).

The Giants were able to get the jump on the Crows in the second half scoring two goals to one, while keeping the Crows to a goal and two behinds to secure victory 4.2 (26) to 3.3 (21).

Meanwhile, for the Crows Ebony Marinoff was superb with her tackling prowess, as she collected nine tackles and 21 disposals, while veteran teammate Courtney Gum was the Crows sole multiple goalscorer with two goals in an impressive performance.

The Crows will travel to the Gold Coast to play the Suns on Sunday afternoon at 1:10pm at Fankhauser Reserve and the Giants will host the Cats on Saturday twilight at 5:10pm at Giants Stadium.

Gold Coast Suns claimed their second victory in its inaugural season by 25-points on Sunday afternoon at Mineral Resources Park.

The win allows the Suns to keep their slim finals chances alive.

It was a super defensive performance from the Suns as they kept the Eagles goalless until the final quarter when they scored their first goal thanks to Hayley Bullas and were winners 5.3 (33) to 1.2 (8).

Young star Sun in the making Kalinda Howarth continued her strong goalscoring form nailing through four goals from her 11 disposals, while teammate Dee Heslop made her presence felt with a game-high 10 tackles.

Former Docker and now Eagle Dana Hooker was a force in the midfield contributing 31 disposals along with her six tackles.