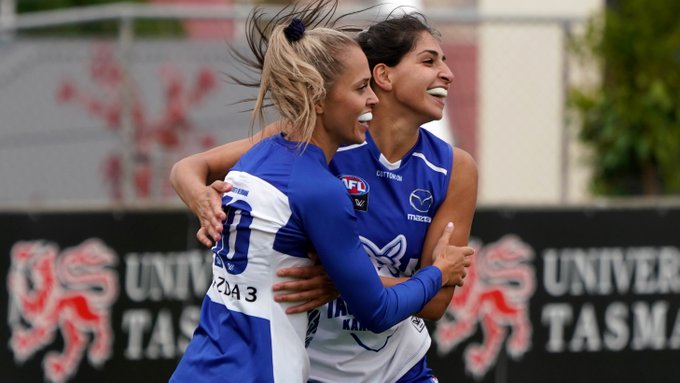 North Melbourne are well and truly premiership favourites after it unleashed a powerful 42-point victory over reigning premier Adelaide Crows at North Hobart on Saturday afternoon.

Less than 24 hours before the match, Crows AFLW co-captain Erin Phillips withdrew because of soreness.

Jaimi Tabb who was named as an emergency replaced Phillips and played her second AFLW match.

After a quick start from the Crows, North were on fire from quarter time at a very cold North Hobart oval, as they kicked three unanswered goals following the quarter time to run out comprehensive victors 10.3 (63) to 3.3 (21).

It was North’s fourth straight victory, as they defeated Gold Coast Suns, Richmond and GWS Giants and they are now ladder leaders in Conference A with three rounds left till finals.

Kaitlyn Ashmore was superb up forward with her ability to find space and put pressure on the Crows defense, as she finished with four goals.

North skipper Emma Kearney was also slick through the midfield with her hands, finishing with 26 disposals and six tackles, while Jasmine Garner (24) was good all over the ground kicking two goals and four tackles.

North led at every change, winning every crucial stat that mattered and the Crows were on the backfoot all afternoon only able to score three goals.

Crows could not get any flow or momentum into their game.

Even the wet and chilly conditions could not stop the red hot North Melbourne.

Using there scoring power, North kicked a flurry of goals with three in the second term and then two in the third quarter and two in the final term, while they were sound defensively, they kept Crows goalless for two consecutive quarters.

The result leaves Crows fifth on the ladder with only two wins and there is a chance they might miss out on the finals.

Crows Anne Hatchard was terrific in the first half and was quiet for the rest of the match finishing with 23 disposals, while Ebony Marinoff continued her strong season with (26) and 11 tackles.

North were on top all afternoon and Crows only had a goal till three quarter time and kicked two majors late in the match.

Ashmore and Abbantangelo were great once again in the second quarter nailing through a goal each, where North nailed three goals and kept Crows goalless.

Clean ball movement and team play started with Vivien Saad who despite under defensive pressure was able to manoeuvre her body with a quick snap forward and found Ashmore who snapped truly for goal.

North held a 28-point advantage at the main break.

Ashmore was lively again in the final term slotting through two goals and it gave North a comfortable lead of 42-points at three quarter time.

In the final quarter, Jasmine Garner popped up and kicked two goals for North.

Just before the match could end, Crows were able to get their second and third goals on the board via Stevie-Lee Thompson.

North now sit in a prime position top of the Conference A ladder and will come up against another in-form team in the competition in third placed Geelong on Friday night at GMHBA Stadium at 7:10pm. Crows will host GWS Giants on Sunday afternoon at Hisense Stadium next week at 3:10pm, as they look to keep their finals hopes alive.