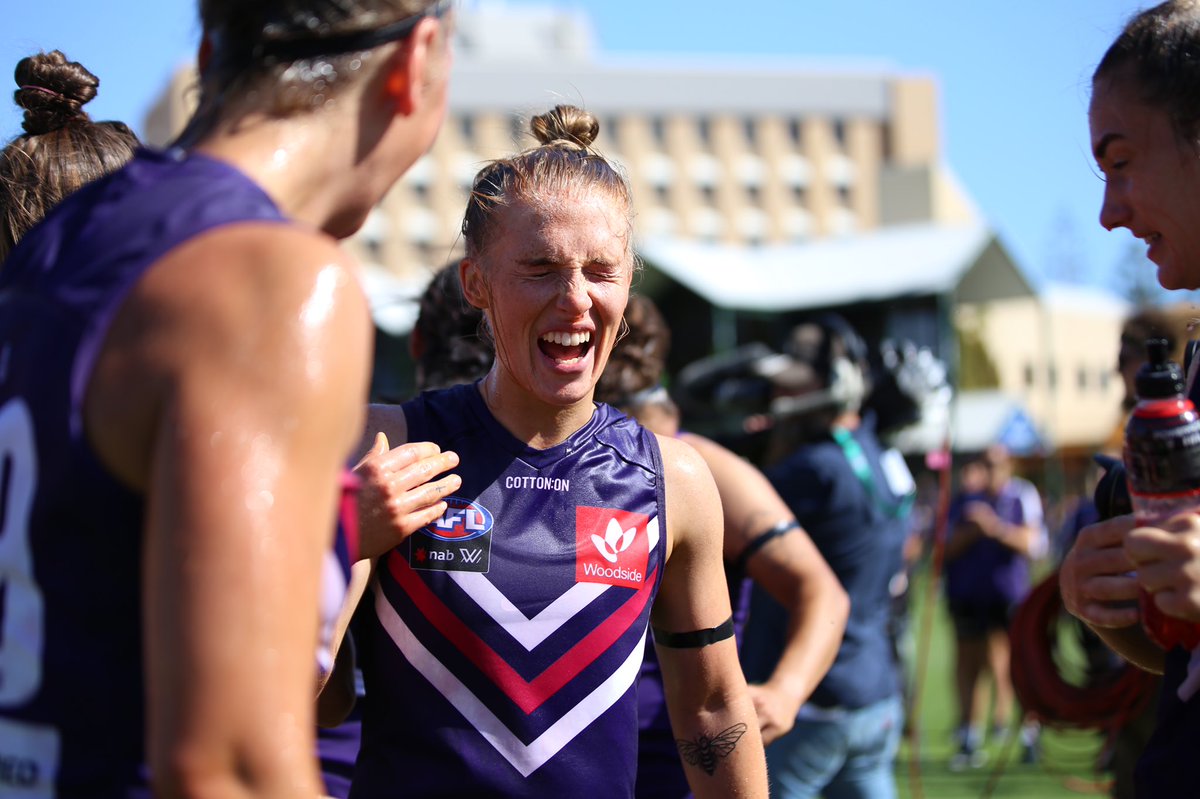 Dockers are the only undefeated team in the competition and sit atop of the Conference B ladder.

Flood was signed as a 2019 rookie signing by the Dockers.

"It was sort of a dream moment that you don't really get, to say it was a dream of mine growing up would be a lie I suppose, but it was just absolutely amazing and an opportunity I guess I couldn't really turn it down," she said.

Flood is just so blessed and grateful that she gets to play in the AFLW.

Flood has played every match this AFLW season.

She has kicked two goals in her AFLW career and her first ever AFLW goal was scored in Round 3 against Collingwood.

Back home in Ireland, Flood captained Louth in Gaelic football for two seasons

Last year, Flood captained Louth to the LGFA All-Ireland title in Gaelic football in 2018 and was awarded best on ground.

The leadership skills that Flood hopes to bring to the Dockers is to get around the girls as best as she can and to help them like they have helped her since joining the club.

"The club have been absolutely amazing, they've done everything they could for both Aine (Tighe fellow Irishwoman) and I since coming over," Flood said.

"(And) making sure we have support and everything.

"It's been different, it's a learning process and I suppose sometimes I have been very hard on myself and forget that I am only new to the sport, but it has been brilliant so far."

Flood loves how the Dockers as a whole have supported and looked after her and Aine.

"I couldn't fault the club or any of the girls as it has really been amazing," she said.

Flood has played in front of big crowds before with Gaelic, but nothing compared to the AFLW games she played in at Fremantle Oval and at Optus Stadium.

"Played one game at Fremantle Oval and the atmosphere was incredible and to have so many people support even in Fremantle Oval 5,000 people there supporting women's team is really incredible," she said.

"To have such a big crowd week in and week out and at Optus Stadium that massive crowd and I suppose the stadium itself (the atmosphere) was a moment you'll never forget and a moment you'll cherish forever."

She hopes to bring a couple of skills to the AFLW from her Gaelic background.

"The pace of it, obviously we don't have the mark in our game so once you get the ball you just keep going so I think for me my pace is something that I have brought forward and I suppose quick feet and kind of stuff like that," Flood said.

"Pace is one thing and the contact at home we wouldn't have much contact in our football, but it's the biggest thing we have to get used to.

"It's been amazing so far and the club has been brilliant and they are helping us out in learning all of the skills."

Flood gave Aussie Rules go, because she could not go any further with Gaelic back in Ireland as she had reached the highest peak in the sport and wanted to challenge herself in the AFLW and that is why she could not say no to playing in the AFLW.

Also, she loves Australia with the lovely beaches and sees this as a massive added bonus to playing Aussie Rules.

Like, many of the Irish women's players Flood's hidden talent is Irish dancing.

The Dockers team culture has been amazing.

"At home I would not say we're not respected, but there is definitely a gap between men and women in sport at home, so to have that professionalism and that respect as athletes it's really is incredible and is an eye opener and I am really honoured to be able to be a part of it," Flood said.

"The whole sport is a really incredible sport, the girls have been amazing and I suppose the whole professionalism of it that women have in that respect as professional footballers I think is an amazing thing and the credit that we're given and I suppose doing the interviews and the whole hype about the game has been so much recognized, as athletes is just incredible.

"At home we do get it but definitely on a lower scale, so I guess the whole respect of being an athlete is amazing."

Flood has had a couple of highlights in her short time in the AFLW including playing at the Optus Stadium and running out wearing the Indigenous guernsey.

"I think to be able to play for Fremantle and it definitely has given us the opportunity and I'll be forever grateful," she said.

"I am honoured to be over here and to give this wonderful sport a go and just if I can challenge myself and do my best for the club and for the girls and for everyone involved."