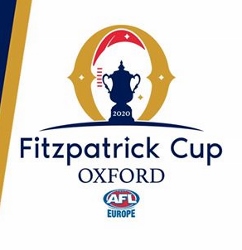 The UCC Bombers and UCC Crusaders have come away from Oxford University with thrilling results at the AFL Europe Fitzpatrick Cup. One winner and a runner-up marked another very good weekend for the Cork-based club.

The event saw the UCC Men’s retain their title, whilst the UCC Crusaders were unluckily defeated by a solitary point. It was a huge day for the Cambridge University women, taking the title. The event also saw teams from four countries compete – Ireland, England, Wales and Denmark – with the Southern Denmark University team making history with their first international team.

In the Men’s Division, the UCC Bombers pinched the game from Birmingham University in the dying moments. The club’s website described the result as follows:
“The boys battled their hearts out all day in Oxford to make the grand-final against Birmingham. They started well with a 20-7 lead at half time. But Birmingham took advantage of the wind in the second half and moved into the lead. With their backs against the wall and only 4 minutes to go and down by 7 points the boys did not give up.”

“Some exceptional mids performances by James Daly, Shane O’Sullivan and David Galvin shut Birmingham down at their source of play and worked the ball up the field again with a quick goal by James Daly there was only 1 point in it.”

“Finally in the dying moments of the game none other than Kieran O’Reilly slotted a snap shot to give the bombers the win. A truly never give up, never die performance from the entire team.”

The women’s final was also a thriller, not decided until the final seconds when the Birmingham team were able to hang on desperately to down an extremely unlucky UCC Crusaders.