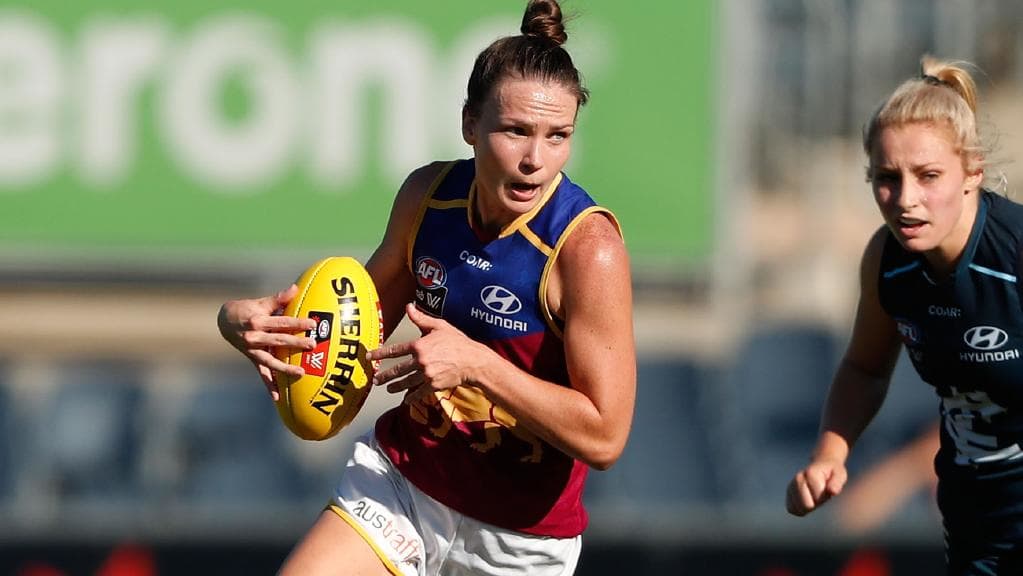 The Brisbane Lions started their 2020 AFLW campaign off on the right note defeating reigning premiers Adelaide Crows by 13-points.

Playing with the Lions since the inception of the AFLW, Bates has been one of the Lions most consistent performers along with Ally Anderson and Kate Lutkins.

"I think just the preparation that I put into every game and every season and every training session," she said.

"I guess that all stays the same from week to week and knowing I've done the work and put that commitment in, I know when it comes to gameday I am ready to go.

"But it's also the people around me, having teammates that I trust and all you have to do is play your role it makes it a lot easier."

She has accomplished a lot in her footy career including being awarded the Lions inaugural (2017) best and fairest, taking out the top honour as QAFLW's best and fairest player (2019) and being named captain of the QAFLW Team of the Year at the AFL Queensland's annual awards (2019).

At the age of 22, Bates was diagnosed with skin cancer.

Since she was diagnosed, her life has changed on and off the field.

"I have had quite a lot of BCC's (basal cell carcinomas) cut out of me over the years and they are not as lethal as what melanomas are, they are quite treatable," Bates said.

"I guess it has just made me more aware and just to look after your skin and health."

Also, the BCC's that were removed were in locations where the sun had been exposed to in Bates childhood, as she was quite active growing up.

The Lions made a long-sleeve jersey in 2019 for Bates to wear and many of her teammates wore it too to provide their support for their mate.

Even though, the jersey was made specially for Bates, she found it to be too hot and not comfortable when playing during a match to have her arms covered up, so instead she applies zinc to her whole body, face and neckline for matches.

With the Lions players wearing the long sleeeve this sent a simple, but effective message to everyone on how we all need to look after our skin.

The skin cancer has led the star Lion to promote how important sun safety is.

Loyalty means everything to Bates as a player and that is why at 24 years old she is playing her fourth season at the Lions and not at any other club in the competition.

'It's just a great club that I can't imagine ever leaving and Craig is a great coach and I have a great relationship with as well as with Breanna Brock (Women's CEO at Brisbane Lions) who has been great in creating one of the best women's programs in the AFLW, so I guess there is no reason to leave the club," Bates said.

Bates has two opponents who have been her most challenging.

"Karen Paxman from Melbourne who has always been tough to play, because she covers so much ground and your constantly looking over your shoulder to see where she is and that and just trying to locate, because just her workrate," she said.

"And she is a difficult player to play on as she is smart around stoppages, she moves around a lot in stoppages and moves to the right spots at stoppages."

The other player who she finds challenging is Emma Kearney from North Melbourne, due to her explosion from the contests and drive making it hard to tackle her.

From the draft, the Lions recruited young key players in Cathy Svarc who will play in the backline and Natalie Grider.

Svarc is a Queensland talent and is the most athletic person she has ever met in her life.

"She will really do well in AFLW this year, so I am excited," Bates said.

"In addition to that you've got Natalie Grider who is also from Queensland and she has taken her game absolutely to another level, she plays tall defender even though she isn't that tall and is an absolute revelation down back.

"And we have also got our Irish recruit in Orla O'Dwyer who is like Cathy, super fit, super fast and also who can do good things on the wing as well as in the forward line."

The Lions targetted fitness and speed over the offseason, because over the previous few years that is what they lacked and the youngsters they picked will help to fill this void.

With four new expansion teams coming into the AFLW in season four, Bates admits it's like season one all over again as you do not know what to expec.

"St Kilda will have the extra edge, because Peta Searle is an excellent coach and the way she built the team up from the VFLW and really fostering the home grown talent," she said.

"I know they did quite well in the VFLW season last year and have a few experienced heads from other clubs.

"I think with Peta Searle as a good coach, she will be able to lead them to great things this year."

The Brisbane Lions will play against the Geelong Cats this Sunday at 1:10pm at GMHBA Stadium