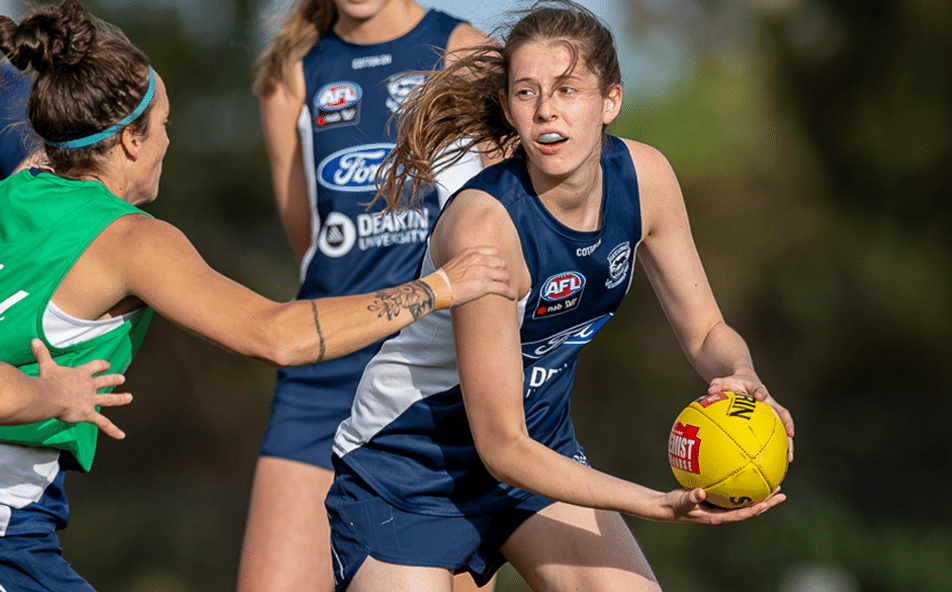 Geelong starts it's 2020 season this afternoon in Perth against the Fremantle Dockers.

She was drafted by the Cats with selection number 35 in the 2018 women’s draft and she became the tallest player at the Cats.

“To say the least, it was probably one of the best days of my life, I feel like I worked really hard to get to that position and had a tiny bit of talk with the clubs and hadn’t really heard much at all,” Caris said.

“And then obviously, you know when I heard Geelong come out now, they are going to select someone and I wasn’t really listening, because Geelong hadn’t really spoken to me.

“Yes, surprisingly they called out my name and I was very shock, but also very excited, as I just heard some of my closest friends had just been drafted to Geelong in the picks before, so it was a really exciting day.”

Caris made her AFLW debut in round 5 during the 2019 season against Brisbane Lions.

When she was young, she played netball and only decided to quit netball a year before she was drafted.

Caris played in the Victorian Netball League (VNL) championship and a few opportunities for her to play in the U-19s team came up, but she decided to focus on footy.

"I do miss netball, but yeah it has been a good decision to fully commit to footy," she said.

When, Caris was asked what are the advantages of being the team’s tallest player at the Cats, she jokingly responded.

“I feel it helps me around the ground and I’m sort of that nominated one to go up and get those high marks or those high spoils.

“But yes it’s something really cool, because I do get to play in the ruck as I really do like to be involved in the midfield with such a great bunch of athletes and to be able to communicate with them and just work with them in general is pretty cool.”

In her second preseason at the Cats, Caris has moved into her own house and feels settled as she embarks on her second AFLW season.

“I think I am just more prepared, sort of last year I was learning my way as I had moved from Horsham, so I am from Rural Victoria and lived on a farm at Quantong near Horsham in Wimmera,” she said.

“I was moving to Geelong and I was settling in and living with two different families.

New opportunities have presented themselves this year at the Cats with fellow ruck partner Erin Hoare retiring and having a baby, so Caris has moved up in the ruck pecking order.

Caris has been learning from ruck coach Aasta O’Connor who she has spent additional time practicing with.

“Been able to put more time into practice with her and it’s been very helpful, which has been good,” she said.

O’Connor has been one of Caris’ coaches since the start of her football journey and has been huge in assisting Caris in preparing to play AFLW, especially on those bigger bodies and more experienced rucks.

Personally, Caris is looking forward to playing more games, building up her strength and learning how to play on the bigger bodies in terms of technique in the 2020 season.

As a women’s team, Geelong is more prepared and stronger in terms of what’s going to happen.

The Cats have a strong VFLW program with a lot of the same girls playing in the VFLW as well as the AFLW team.

“I just think the whole Geelong footy club is just so much more ready for it,” Caris said.

“I just feel that this year, we are even more prepared than last year, so I am really excited to see us gel as a team.”