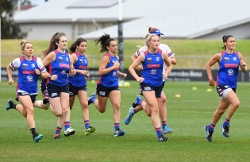 In an article by Emma Duffy at THE 42, the argument about whether elite sportswomen in Ireland should be free to choose to play in both Australia for the AFLW and back home in Ireland gathers momentum.

The following article looks at the different sides to an emotive argument. It is also an argument that does not have a definitive answer, as individual women will want to choose their own directions rather than a “one size fits all” approach.

12 of the 18 Irishwomen preparing for AFLW action are managed by CrossCoders – and its co-founder Jason Hill has responded to Peter Leahy’s claims.

An Aussie Rules agent has hit back at Mayo ladies football manager Peter Leahy’s suggestion that there should be a rule that Irish players should have to pick one sport or the other.

Eighteen Irishwomen are preparing for the 2020 Australian Football League Women’s [AFLW] season, which kicks off next weekend, and most will return for inter-county championship action this summer.

Earlier this week, Leahy warned against the promotion of the league Down Under, which he claims has the potential to damage ladies football “quite extensively”.

Dublin manager Mick Bohan also said he has “mixed feelings” towards the exodus Down Under.

Jason Hill, an AFLW agent and founder of CrossCoders, an agency which has had unprecedented success in bringing Irish players to Australia, has taken issue with a number of Leahy’s statements, and contacted The42 from Australia yesterday.

“Telling the players they would have to choose between something they never thought they’d get the chance to do — play professional sport — or play for their county, their first love, isn’t fair on these amazing sportswomen who have devoted their lives to getting to this level,” Hill said.

“These women should be celebrated as some of the best sportswomen that Ireland have produced, not questioned by someone publicly in the media about their decisions to represent their country on an international stage and fly the Irish flag.”

In his in-depth interview, Leahy  suggested that this rule that players pick one or the other would mean that “the AFLW has to financially secure them for a full year”.

To read the full article by Emma Duffy, follow this link: https://www.the42.ie/jason-hill-response-to-peter-leahy-afle-ladies-football-4977160-Jan2020