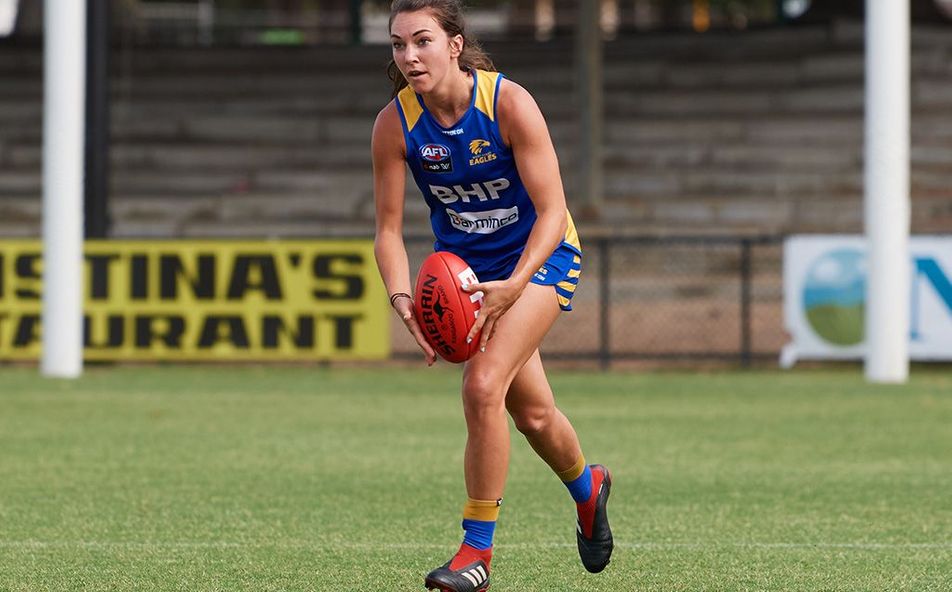 Kelly signed alongside older sister Grace as rookies ahead of the Eagles inaugural AFLW season.

“It was a massive opportunity and we’re absolutely delighted,” Kelly said.

“And we first of all got a message from Crosscoders and what they do is have opportunities for other athletes from other sports to transfer to AFLW.”

When the sisters received the message, they were unsure if it was a spam message or not, so they looked into it a bit more and were thrilled that it was in fact real.

Kelly and her sister sent their applications about a year and a half ago.

The sisters could not come out last year when there was a two-week camp in Melbourne, because of work commitments.

“We never thought it would materialise into anything and then after that because we couldn’t make the camp, we got into contact with four clubs,” Kelly said.

“And West Coast Eagles were the first club that we were into contact with and we were just blown away with their professionalism.

“We were talking to Luke (Dwyer) and Adam (Selwood) on the phone and they were so welcoming, and they really described the place to us so well with their facilities and everything.”

The women spoke a couple of times with the Eagles and within two months they were both offered to play at the West Coast Eagles.

“We were absolutely delighted to come over from Ireland and to play in Australia we never dreamed of that.”

Kelly played in her first challenge match against Fremantle and she felt great to be out in the blue and gold with everyone.

Last year, Kelly was the captain of the Mayo Gaelic football team and she admits that it’s number one to get along with everyone on the team individually.

“And communication on and off the field is important and you can communicate that message on the field,” she said.

Kelly has enjoyed her time and preseason so far in Perth at the Eagles.

“The facilities in West Coast Eagles have been top class and there’s so many people on the management team so there’s always people there to help,” she said.

“Our time in preseason has been really good, the girls have been so welcoming as well and so the vibe around the club has been incredible.

“Luke (Dwyer) and Adam (Selwood) have done extra skill sessions with me and my sister Grace and that has really helped us to develop in the preseason.”

The main skills from Gaelic football, that Kelly will transfer to the AFLW will be speed, endurance and fitness.

“Fitness and speed will be my main strengths that I will transfer across from Gaelic,” she said.

For Kelly she has had to get use to the AFLW as she is coming from Gaelic a non-contact sport.

“In one of our first training sessions I was tackled by our captain Swanny, I got an unbelievable tackle from her and was rattled to the ground and I was like oh geez!, she said.

“It was the best thing to happen, as once you get your first taste you know what to expect.”

Kelly never knew AFL was a sport when a kid and only found out about it when the International Rules sport came out.

“I started to realise that it was a mixture been AFL and Gaelic football and started to look into it a bit more,” she said.

“And a few Irish girls came out last year, Ailish Considine went to Adelaide Crows and ended up winning the Grand Final, so that was huge news all over Ireland.

And that enticed us even more to pursue our dream then after talking to Adam and Luke, it kind of went from there.”

As the captain of the Mayo Gaelic team, Kelly will bring leadership qualities to the Eagles team.

Kelly has fitted well into the team culture at the Eagles.

“The culture in the club is absolutely incredible, the first day we walked into the club Grace and I were like wow and everyone is unbelievably nice,” she said.

“The point that it’s an inaugural team and is special to us, as we are part of creating the culture with the girls, which is one of the things that enticed us to come out to here as well.”

Kelly loves the small things the Eagles do such as Luke and Adam were standing at the airport with flowers for Grace and her.

Kelly cannot wait to play her first season in the AFLW.