Gay grew up playing basketball, netball and some swimming, but had to choose one and she chose netball that she played for 12 years before switching over to footy.

Her top achievements include going from the rookie list to the primary list and then being awarded the best first year player at Carlton (in 2018).

As an athlete with many years of netball experience, she uses the footwork gained from this experience out on the footy field.

“I try to use that to my strength to be on the move,” Gay said.

“But also, with the peripheral vision I thought I brought that to the footy game as well.”

Gay has found getting back into AFLW 4.0 preseason, a bit easier.

“I found the first two years hard to get back into it, because of being on the netball field for so many years and changing to the footy field,” she said.

“Yes, obviously still hard, but the enjoyment is still there so it makes you want to work harder out on the track for the girls, but yes, it’s been good.”

Gay played her first year in the AFLW at Carlton and then moved to Melbourne where she has played for the last two years.

“First year (at the club) with Dais having the two bubs allowed me to have a bit more midfield time and I was kind of feeling comfortable there and learning in the elite midfield at the Dees,” she said.

“But obviously this year I had to adapt to Daisy being back and proving that I can still play there and give more.

“And also, you have little players coming into the competition and they’re challenging everyone for their spot, so those challenges are also good for everyone in the team.”

The Irish girls, Sinead Goldrick and Niamh McEvoy have fitted into the team culture at the Dees and AFLW nicely.

“They are two classic girls, which obviously humour makes it easy to get along with everyone,” Gay said.

“I didn’t meet them straightaway, but the team had a few functions and got to meet them there.

“And at training they ask a few questions and they just want to learn so much and then we pay them respect.”

Goldrick and McEvoy had their first hit out against Geelong.

And as Gay has seen them train for the past eight weeks and what they have put out onto the ground simply puts a smile on her face to see them improve each day.

“Just the way they are able to take off on the ground and I think all of the Irish girls who have come across to AFL (have brought this) just because their game is so speedy,” she said.

“And I’m sure other teams say the same and just their pace out there is unbelievable, you pretty much want to hand them the ball and let them run.”

In the AFLW, Gay looks up to her teammate Elise O’Dea who she did not really know before going to the Dees.

“(During) the offseason we did a few sessions together and earned a lot of respect for her and her work ethic,” she said.

“Her respect for her teammates and what she will do for them out on the footy field.”

In the AFL, Gay used to idolize Geelong defender Corey Enright, as she loved the way he attacked the ball.

Gay is looking forward to playing on former Carlton teammates and good friends, the Hosking twins.

“We have already spoken and given each other a few words, but obviously didn’t get to play against them last year which may have been a good thing to let me settle into the Melbourne team,” she said.

“But really looking forward to playing against those girls and still friends with a lot of them over there, so it will be even good to see them out there.

“Hopefully, it’s a good game and may the best team win.”

Melbourne have been contenders in the first three seasons and look likely to challenge again at the pointy end of the AFLW season.

“We have had a really good offseason, majority of the girls play VFLW and they have come into the AFLW preseason looking really good, so I think we’re feeling fit and ready to go,” Gay said.

“You can train for as long as you want, but I just want to see all of us out on the track or out on the ground hopefully winning some games and playing the best footy we can.” 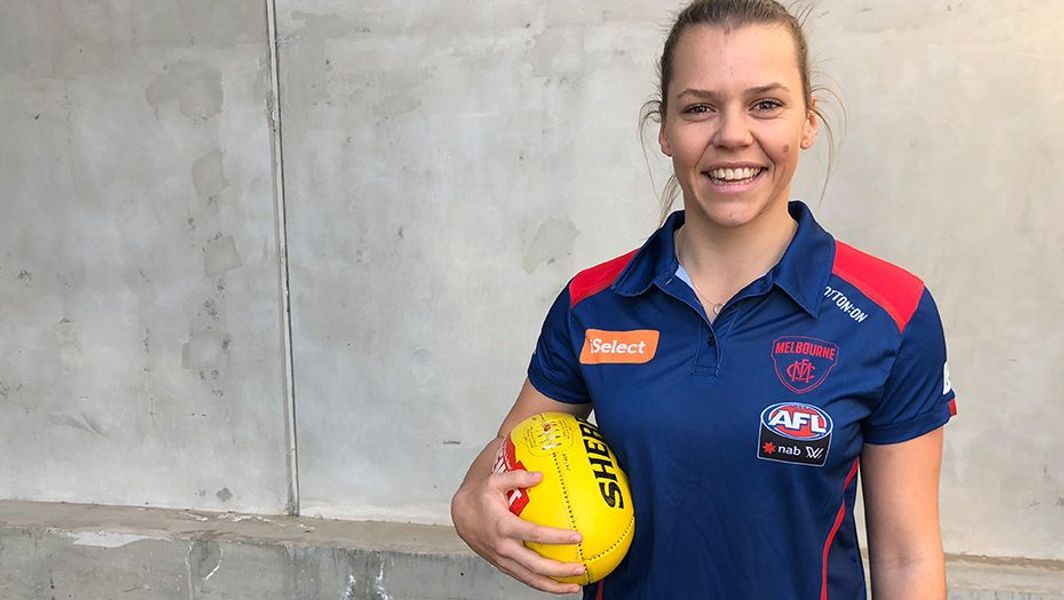