Lights Out! Tigers Tame Buffaloes Ahead Of Blackout 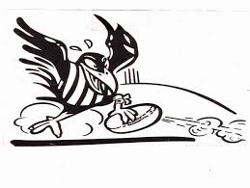 Some local electrical issues brought an early end to the NTFL Premier League match between the Nightcliff Tigers and the Darwin Buffaloes. Around 17 minutes into the third quarter of the match, a nearby electrical substation ‘had blown’, which in turn saw power lost at TIO Stadium.

League rules state that if a delay extends beyond 30 minutes, the result at the time will stand. In this case it saw the Nightcliff Tigers leading 12 8 80 to the Darwin Buffaloes 7 5 47. This became the final score when power was not restored.

The win consolidated the Tigers’ spot at the top of the ladder. The Buffaloes now sit in fifth place.


It was a huge weekend for the Palmerston Magpies, recording their maiden win for the season. Their victory against Wanderers broke the drought. Whilst they are still two games behind their nearest rival in last place, the win does give a glimmer of hope to win enough games to avoid the wooden spoon.

Wanderers, on the other hand, find themselves consigned to missing the finals unless the most dramatic turn of events can occur over the remaining five rounds. They would need to win all remaining matches and hope that either the Buffaloes, Crocs or Bombers lost all of theirs.

St Mary’s won the wooden spoon last year, yet now sit second on the ladder, and on form the only team with the ability to stop the Tigers going back to back. Their 13 point victory against the Southern Districts Crocs dumped their opponents to fourth place and strengthened the Saints’ own confidence headed towards finals.

The Tiwi Bombers enjoyed a big win against Waratah by 57 points. It launched the club into third place on the ladder and they now seem certain to play finals again this season.