The Next BIGGIE Thing 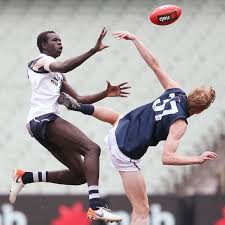 Last week’s AFL Drafts unearthed a huge new pool of talent, but unlike previous seasons was light-on for international players or players of multicultural journeys. One exception to that, taken in the draft on Thursday evening, was Bigoa Nyuon – snared by Richmond from under the Brisbane Lions’ nose at pick 54.

In an inspirational tale sharing the same basic plot lines as many other players from African countries now playing (or have played) in the AFL, Biggie, as he is known, was born in Nairobi, Kenya, after his family fled war-torn South Sudan. He lost his father in the fighting and his brave mother Mary managed to get as many of the divided family to Australia as possible. Some were in Kenya, some in Ethiopia, all were refugees.

Fast forward to 2019 and Biggie now has an AFL career ahead of him. He isn’t the first Nyuon to taste AFL football. His brother Gach spent a year on Essendon’s rookie list in after being selected in the 2015 Rookie Draft. He didn’t get another contract extension, but Biggie is destined for bigger things. As he said to Channel 7 in an interview, he is “bigger, stronger and faster” than his older brother, and by all accounts more talented.

A member of St Kilda’s Next Generation Academy, on draft night Richmond pounced by making a bid on the academy player. St Kilda did not match the bid and the Tigers added another potential star to their ranks. With two flags in three years, Richmond are heading towards a dynasty, and Biggie has the chance to be a big part of that.

Inspired by current African-born players in Aliir Aliir and Majak Daw, Biggie is aiming high. His playing style is mostly compared to Aliir’s. He joins an ever-growing list of players from African countries, and has his dreams to emulate them of surpass them. However, he also desires to be a role model for other Australian-Sudanese youth – footballers or not.

One player he immediately gets a chance to work with is Maboir Chol, the South Sudanese born Tiger ruckman who enjoyed his own breakout season in 2019 as fellow Tiger ruckmen were injured. Chol played 10 matches and kicked nine goals – and even registered a Brownlow Medal vote in Round 15 against St Kilda.

Chol has set a high bar for Nyuon, but standing at 196cm, and being the fastest of all draft prospects at this year’s combine for the 20m sprint, Nyuon already has some impressive advantages.

His journey from Nairobi, Kenya to Rowville, the Dandenong Stingrays, the St Kilda Next Generation Academy and now Richmond is incredible and like other refugees before him, inspirational.

However, Biggie is humble, and told Channel 7 he “just want[s] to make my family proud and play AFL and be on TV."

He is destined to win on all counts there.