Debate: Should Irish AFL Players Be Allowed To Play Gaelic Football In Off Season? 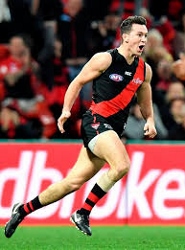 With Essendon’s Conor McKenna playing in a game of Gaelic Football when home in Ireland recently, the spotlight has turned to the question of whether or not Irish footballers playing with AFL clubs in Australia be allowed to play for their local clubs/leagues in Gaelic Football matches when they return home, usually in off-seasons.

When reading the media stories and associated fan comments, there is something of a polarisation in opinion. One camp is firmly in the “too big a risk of injury”, and therefore cannot be allowed. The other camp sits largely along the lines of a trip to Ireland is a player’s private time and they are entitled to risk injury.

The clear third option is that the issue isn’t risk of injury, it is the fact that a simple enquiry to their club to advise or discuss the matter may have made a big difference.

When Conor Mckenna returned to Ireland a couple of weeks ago to play for Eglish in County Tyrone, of where he is a native son, he scored a second half goal that succeeded in allowing Eglish to avoid relegation. For the local club, this was a huge match and if the rules in Ireland allowed for McKenna to play then all power to Eglish.

In 2018, both Conor Nash from Hawthorn and Geelong’s Mark O’Connor had equally well publicised forays onto the fields of their original home teams. These three players are not the only ones who have done this, but they are the most heavily scrutinised as media, clubs and fans weigh into the debate. As none of these players asked AFL club permission, we don’t really know what the clubs would have said.

Though, we suspect after reading Essendon coach, John Worsfold’s, comments that McKenna would not have been granted permission based on risk of long-term injury. “"We certainly didn't send him back there to play football," was Worsfold’s comment in an interview with the SEN radio station.

"I was really disappointed when I heard that. We know he's passionate about his Gaelic footy. He's an energetic young man, his personality is so up and about.

"It puts them (the Irish AFL players involved) at risk of an injury, of doing something that's outside their contract. In effect, it puts them at high risk of costing themselves a contract or a lot of money."

"I won't speak to Conor until he gets back, and I will be disappointed that he played, and at least didn't feel like he could have rung and just checked."

"Out of everything you can do as a footballer in the off-season, going and playing non-contact football would be the best.”

Both Geelong and Hawthorn made similar reference to players having the courtesy to contact the club beforehand.

According to the www.afl.com.au website, “Hawthorn’s Conor Nash played for his local Gaelic team, Simonstown, without the Hawks’ knowledge ahead of the 2018 season, but ex-Blue Ciaran Byrne sought approval to play for St Mochta’s last year.”

Nash was quoted as saying that, “going home, I suppose, you can get caught up in a lot of things in the local community and people asking you to play who are not really thinking of your best interests.”

“I got caught up in that a little bit. I played only half a game of football, which wasn’t my wisest decision, but I came back here and we had a chat about it and dusted it over.”

Another article on the same AFL website regarding Geelong’s Mark O’connor addressed his ‘secret’ match for Dingle in a County Kerry semi-final.

"It was down to the risk of injury which would then compromise his ability to play and train for Geelong," stated Simon Lloyd, Geelong’s head of football at the time.

"We (told Mark we) cannot provide permission for you to play in further Gaelic football games as it's a breach to his contract."

"To Mark's credit, he acknowledged Geelong was his main priority and that he wouldn't do it again."

One factor that is mentioned, and is probably valid here, is that the promotional value of current or past AFL players turning up for local clubs back in Ireland will continue to sell the game further. The development of Irish players has grown in recent years with a wider and arguably more talented pool of players – all turned on to the game by exposure to local leagues through AFL Ireland, or just enjoying the success of the McKenna’s, Nash’s and O’Connor’s who have blazed a path for others to follow. To see these boys liv in action in a hometown would be a VERY powerful motivator to try the game.

This idea links heavily to the whole “homesickness” factor. Being an elite AFL athlete who is paid squillions of dollars to play still cannot remove homesickness. But, maybe the chance to be closer to their home clubs could offset that homesickness to some degree. Nobody really knows the answer because not enough data exists to validate that claim either way.

The clubs may not be convinced by this argument – reluctant to lose a key player to a season-ending injury. However, the AFL might see things slightly differently, aware of the promotional values.

Either way, the argument might well be settled by club protocols whereby players can request to play directly through their clubs, sign waivers on contracts and insurance forms and come to a win-win arrangement.

Nevertheless, it is an emotive argument, and as such welcomes debate. World Footy News are interested in hearing viewpoints on the topic.