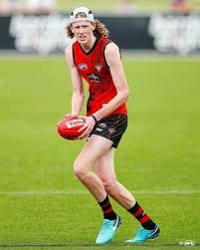 Mitch Cleary from the www.afl.com.au website reports on the latest young footballer to turn his back on a career in the AFL to pursue punting in the NFL. Son of Essendon legend, Mason Fletcher, has decided not to continue in the footsteps of his esteemed father, Dustin Fletcher and grand-father, Ken Fletcher to try his hand – or foot – at the American game.

A BOOMING Fletcher boot could soon be set for the world stage after Dustin's son Mason quit football to pursue NFL punting.

The father-son prospect informed Essendon of his decision to end dreams as an AFL defender in recent weeks and begin chasing a career in the USA.

Fletcher, 19, opted to sit out of last year's NAB AFL Draft after a season plagued by back injuries, instead eyeing the 2020 drafts as a pathway to the Bombers.

Invited back to NAB League club Calder Cannons, the 200cm backman also spent time training with the Bombers and using the club's facilities during school holidays.

He went on to play 14 matches as an overage player for the Cannons, including booting five behinds in a NAB League final at IKON Park in September.

Known for his punishing right boot that consistently travelled more than 60m, Mason carries distinct similarities to his 400-game father Dustin, who was known for his long boot.

With his draft hopes fading, Mason decided to explore the potential of a career as an NFL punter with experts believing he could land a College scholarship within 12 months.

World Footy News has been tracking the progress of Nik Constantinou, a key position player in the Essendon districts who has taken a scholarship with the Texas A & M team in American college football. For more information on his progress – and hopefully to be replicated by Mason Fletcher – see When Dreams Come True.

To read the original story on Mason Fletcher, go to: https://www.afl.com.au/news/2019-11-16/fatherson-prospect-mason-fletcher-quits-footy-to-pursue-nfl-punting-career