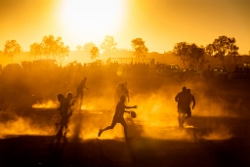 The following article from Matthew Abbot at The New York Times (www.nytimes.com ) is a wonderful account of how important the game is to players in some of Australia’s most isolated locations. World Footy News has previously explored Lajamanu football (See: Lajamanu Footy – “The lifeblood of the community”) and what the game means to them. This story, from New York – half a world away from Lajamanu and Yuendumu – again tells an amazing tale of determination against all manner of odds.

For Indigenous Australians in isolated towns, “bush footy” is more religion than sport. Neither distance, the police nor even death can keep teams from competing.

LAJAMANU, Australia — Halfway into a 400-mile journey through a dusty stretch of the Australian desert, the team’s minibus ran into trouble.

The players, Warlpiri Australians from one of the country’s most isolated towns, were headed to a carnival, a celebration of sport and culture that brings together far-flung Indigenous communities from across the Central Desert.

Much of the drive to the site of the event, in Yuendumu, from their home in Lajamanu, Northern Territory, was a straight shot along the infamous and empty Tanami Road, a bone-rattling dirt track that stretches 650 miles.

To continue reading this story, follow this link to The New York Times and either take the option to read one article free, or sign up for an account:  https://www.nytimes.com/2019/11/07/world/australia/australia-bush-football-.html