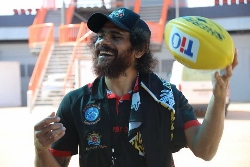 You didn’t need a seismograph to measure the ground shaking on Bathurst Island yesterday. You could feel the earth move in Darwin. The epicentre was at Wurrumiyanga, the main centre on Bathurst Island, Tiwi Islands. The cause – one Cyril Rioli Junior.

Named on the Tiwi Bombers’ team sheet two weeks ago before withdrawing before the match (See Rioli Back For Tiwi Bombers - Possibly) , this time Rioli ran out onto the field for the Tiwi Bombers, already sending the local crowd into a delirious frenzy. Ever since retiring from Hawthorn in 2018, after a decorated AFL career and later signing on as one of the Tiwi Bombers assistant coaches, if was felt that Rioli would undoubtedly don the red and black again on the playing fields – as he did briefly before being drafted to the Hawks in 2007.

Cyril played seven games for the Bombers prior to his Hawthorn era.

Yesterday, Rioli got onto some very handy early touches in the first quarter and helped set up some goals as the Bombers got out to four goal to two opening term. The next two quarters, however, firmly belonged to the Palmerston Magpies with eight goals to two and holding a four-goal lead at the final change.

In a tense final term, the Bombers clawed back in the wet and greasy conditions but headed towards the final siren they still trailed.

Enter ‘Junior Boy’ Rioli. His front and centre snap-shot from 25 metres out went through for a goal that saw Bathurst Island erupt – and Darwin quiver across Beagle Gulf. The goal didn’t put the Bombers in front…couple more behinds did that. In fact, the scores were shown as level at the final siren until the goal umpires met and confirmed the Bombers winners by two points.

It was a sizzling end to a game that saw a footy legend return home to play in front of an adoring home, spiritual home, crowd.

The Bombers also had their second win of the season to stay in the finals race.

The match also has a very ‘AFL’ feel to it. Not only did Rioli grace the turf, but Austin Wonaeamirri (ex-Melbourne Demons) was his team mate. The Palmerston Magpies were also led by Alwyn Davey (ex-Essendon) and his brother Aaron ‘Flash’ Davey (ex-Melbourne). Back in Darwin, St Mary’s also proudly unleashed Jake Long, son of Essendon, AFL and Northern Territory legend Michael Long, after his delisting by Essendon last month.