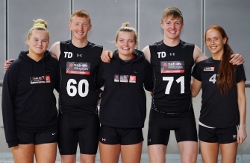 Marc McGowan reports on the www.afl.com.au website that Essendon will add yet another Irishman to their list for the 2020 season and beyond. Building on their success with Conor McKenna (fourth in the club’s best & fairest this year) and the exciting recruitment of another potential Irish star in Ross McQuillan last month, Essendon has been impressed by McBride and delighted to bring him to the club.

ESSENDON has won a commitment from a second Irishman, with key-position prospect Cian McBride set to be a Bomber in 2020.

The budding defender is 197cm and 90kg, a strong mark, ran sub-three seconds for the 20m sprint and placed in the top five in the running vertical jump (87cm).

He hails from the same Gaelic football club, Meath, as Hawthorn's Conor Nash.

Richmond, Carlton and Melbourne also showed some interest in McBride.

Gallen's best result was in the agility test, where his 8.2-second effort ranked fifth at the combine.

Essendon announced in mid-September – after many months of wooing him – that it had signed speedster Ross McQuillan, who was the standout at last year's AFL Europe Combine.

Both McBride and McQuillan will receive two-year deals, but the Bombers can select only one of them as a Category B rookie, with the other needing to have Category A status.

Category A rookies are eligible to play senior football immediately but Category B players must be promoted to do so.

McBride and McQuillan will hope to replicate new teammate and fellow Irishman Conor McKenna, who's become one of the Bombers' best players.

Gold Coast also officially signed Luke Towey this week after he trialled with the Suns in August.

A record 17 Irishmen are set to be on AFL lists next year, with another 18 locked in to play in the AFLW.

The original story can be found at: https://www.afl.com.au/news/2019-10-11/mcbride-to-be-a-bomber-essendon-to-sign-197cm-strongmarking-irishman

Picture: McBride (second from right) with other men Irish men and women from the combine. From www.the42.ie