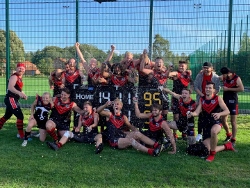 It has been a massive year for the Norrtälje Dockers in the Stockholm Australian Football Federation (SAFF), culminating in a second premiership for the club. Downing the Södermalm Blues in the Grand Final was the icing on a pretty impressive cake in 2019.

The city hosted the 2019 Euro Cup back in June, and impressed the entire European footy community with a well-run tournament – a massive undertaking for any city. However, all that energy expended on the event made no difference to the Dockers’ charge to a Grand Final berth, nor did the team run out of breath on the big day, proving too strong for the Blues by 42 points.

The following excerpt from the http://www.afleurope.org website sets the scene across the season for both teams in the lead-up to the big match:

“On a sunny but breezy September day in Stockholm, the Norrtaljie Dockers played the Sodermalm Blues in the battle to become the 2019 SAFF Premiers. During the home-and-away season, the Dockers had just edged the Blues to the minor premiership thanks to a superior points differential and over the three games during the season, the Dockers recorded two wins. However, the Blues had won the most recent encounter, thanks to a one-point victory in the final game of the regular season and as a result, had the momentum heading into the final match of the season.”

To view the whole article from AFL Europe, go to: https://afleurope.org/pss-presents-ar...rounds-30/

The game was tight across the first half, with a late push from the Dockers setting up a 15-point break at the main break. As hard as the Blues fought in the third quarter, the Dockers had the answers and broke away late in the term to lead by more than five goals. They almost had it in the back, but there was a distant glimmer still for the Blues.

The Dockers, however, would have none of it and withstood an early final quarter challenge from the Blues to take control and take the match.

The premiership cup will sit nicely for the Dockers alongside their 2016 trophy, and is a great reward for a club that has worked extremely hard this year on and off the field.

The Fremantle Dockers might also want to sit up and take notice as the Norrtälje Dockers flag sits well with the Hamburg Dockers flag win in Germany and the Turku Dockers in Finland. That anchor is getting a decent workout across Europe.

In Sweden, however, it is the deeds of the Norrtälje Dockers that will be celebrated for 2019.