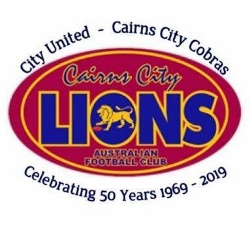 The Cairns City Lions will play finals in 2019. To anyone outside of Cairns, that phrase could be met with little interest. However, in the Far North Queensland city, with a big local following of Australian Rules football, a return to finals football for the Lions is nothing short of remarkable.

Coach Aaron Davey, himself best known as a star player for the Melbourne Demons over 178 games between 2004 and 2013 for 174 goals and four International Rules games for Australia, has arrived at a club on the brink of extinction and saved it.

Admittedly, he hasn’t done it on his own. He has had the buy-in of the club committee, players, supporters and local community, scattered largely over the Cairns’ Northern Beaches and especially Holloways Beach where the club is based. It has been a genuine club effort to stare defeat in the face and laugh at it.
Back in 2017 I wrote a story about the club and my experience one day when the senior team lost by 290 points (see 48.17 (305) to 2.3 (15) – Ouch!). At the time, despite the never-say-die attitude of the team, one could have been forgiven for seeing that day as the nadir of the club’s existence and a catalyst for doom.

However, Davey and his pride of Lions have instead used the event as the turning point. That day was a little over two years ago…certainly only two seasons ago. Today the team had a bye, but sat and waited as the final round of AFL Cairns matches were played out to ensure that a finals berth was a reality. It was.

Early in 2018, after Davey’s arrival at the club, I wrote another story that looked at his and the club’s vision for the future. (See Anatomy Of A Rebuild – Cairns City Lions) Looking back now at that story of hope, it is remarkable that the club has stuck true to those visions and will play finals – just two years after the worst defeat in the club’s history.

Davey has brought together his own AFL experience, his coaching experience from Palmerston in the Darwin-based NTFL and also his brother Alwyn – a former 100-game player with Essendon - and a host of other past-AFL and NTFL players together to help drive that vision. It has worked tremendously well and has brought the club time to develop the next generation of young players who can take the club further in years to come.

But, perhaps more importantly than his impact on the Cairns City Lions or AFL Cairns is his blueprint for success that can be reviewed and adapted by any struggling club across Australia or overseas. The resources at the disposal of the Cairns City Lions might be more than struggling suburban clubs across Australia, country clubs facing hard times or fledgling clubs overseas with limited recruiting options or grassroots pathways. However, one thing exists in all clubs everywhere – determination. Whilst there is a pulse within a club there is hope. From there the determined people within those clubs can brainstorm, create, implement, dream - whatever they can bring from inside their hearts and minds and lay on the table for others to see.

It is what Aaron Davey has done, and his Lions have responded in a manner not often seen.

To many, Aaron Davey is the King of the Lions. In many ways that is correct. However, it misses the point that a king is only as strong as the pride that surrounds him. Without that “pride of Lions”, Davey would not have had a chance to be successful. He has been blessed with support and determination from many, many people and organisations that have come together spectacularly in just two
years.

It is 13 years since the club saw finals action, and not only has the senior team achieved something rare, their reserves finished the season with a win and seven wins for the year in their first season back in reserve grade after a hiatus of a few years.

It would be lovely to see the Lions win finals – and that will be their goal. But the victory they earned today is special.

The Lions are already “kings” of their domain, whether or not they win another game this year.

Davey's nickname is "Flash". But, perhaps, more fittingly it should be changed to Mufasa...or Simba. A Lion King.