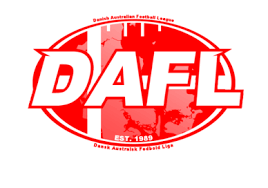 The DAFL season in Denmark is fast approaching finals with just three games left to complete across two remaining rounds. The Port Malmö Maulers feature in two of those matches, which makes the fight to the finals very interesting.

In recent weeks, the Farum Cats have flexed their muscle with important wins over both the Maulers and the Odense Lions. A narrow win over the Maulers in Limhamn followed by a big win over the Lions sees them sitting pretty with a match to go in first place. With a match to go against bottom team, the Aarlborg Kangaroos, the probably cannot be beaten now for the minor premiership – barring some form of miracle.

However, the Maulers have a game in hand and will most likely finish in second place going into the finals.

Neither the Odense Lions nor Copenhagen Giants have set the world on fire since they met in Round 8, both suffering heavy defeats or forfeits along the way. Without being dismissive (because in finals, anything can happen), it seems both teams could be making up the numbers come finals time.

Since the Cats scraped home by five points against the Maulers back in round 9, both have since had powerful wins. The Cats hammered the Lions in Round 10 by 86 points. The following round saw the Maulers crush the Kangaroos by 128 points. Both are in form and neither will release their grip on the competition from here.

Although, only one of them can win the flag.

Today’s game will see the Maulers travel to Bolbro to take on the Lions. A win there and they will enhance their premiership prospects, especially if the defeat the Copenhagen Giants in the final round next weekend. The Cats can tune up in Round 13 against the Kangaroos, but will watch the Maulers’ results with interest.

Finals start on September 14th with semi-finals – teams and venues to be decided. The Grand Final will be played on September 21st