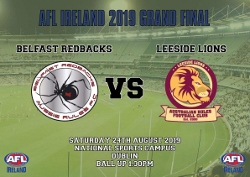 The Leeside Lions have pulled off an upset result by defeating the Galway Magpies in the AFL Ireland Preliminary Final to book a place in the 2019 Grand Final. After a solid season from the Magpies, and an at times indifferent season from the Lions, the game proved that history matters little and the best team on any given day will win.

According to the Leeside Lions’ Facebook page, “last Saturday saw the Lions take on the Galway Magpies in the Preliminary Final with the Winner advancing to take on the reigning premiers the Belfast Redbacks in the Grand Final.”

“The Lions hoped to put their disappointing end to the regular season behind them and with the head to head standing at 1 each this season against the Pies the third instalment was always going to be a tight affair.”

“Conditions on the day where tricky to say the least with a strong wind and rain blowing down the centre of the pitch ensuring that each quarter presenting a new challenge for the teams.”

“In the end the Lions came out on top to advance to the grand final on the 24th of Aug in the National Sports Center.”

Awaiting the Leeside Lions in next weekend’s big match are the Belfast Redbacks – undefeated for two seasons. The Lions won the title back to back in 2016 and 2017. The Redbacks are the reigning champions and hoping to also go back to back by taking the 2019 title.

However, the Redbacks have been by far the best-performed side this season, with no team really getting close on the scoreboard. The Lions did very well to down the Magpies and reach the “big dance”, but they will have a tough day against the rampaging Redbacks.

Though, as they say, things are not a foregone conclusion and the best team on the day will be crowned 2019 champions.