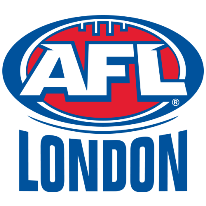 The following article “Six Points” from the www.aflengland.org website looks at the upcoming grand final weekend for AFL London, as well as a flag already decided for the London Swans. The column is a regular update provided by AFL England on all leagues in the country and always worth a read.

The first AFL London premiers have been crowned and the other Grand Finals have been decided, so it’s time for a ‘Six Points’ to wrap up the weekend’s results and look ahead to the Big Dances next weekend on Hackney Marshes!

First things first it’s a huge congratulations to the London Swans who scored a resounding victory in the AFL London Women’s Conference Grand Final, winning by 6.20 (56) to 0.0 (0) against defending premiers the Wandsworth Demons.

The Wandsworth Demons will come up against familiar foes the West London Wildcats for the second time in three weeks to decide the AFL London Men’s Premiership after the Demons saw off the North London Lions in their preliminary final.

After trading narrow victories during the regular season, the Demons emerged victorious 11.2 (68) to 7.3 (45).

After defeating the London Swans in the elimination final, the Hawks ensured that there would be no rematch of the 2018 Grand Final between the Demons and the Shepherds Bush Raiders, and the Hawks will now aim to become only the second team to defeat the Raiders in a Men’s Conference Grand Final.

There was a second consecutive year of 0-2 finals runs from the Reading Kangaroos after their loss to the Ealing Emus saw them bow out. After a disappointing 94-point loss to the Demons, this was a closer affair but a strong first quarter which saw the Emus kick three goals to none saw them run out 4.7 (31) to 3.3 (21) winners.

It will be the Emus then who advance to face a Demons side that is undefeated in seven Men’s Social Grand Finals, winning the last four.

There will be a rematch in the AFL London Women’s Premiership after the Demons saw off the Wildcats 3.11 (29) to 0.0 (0). The Demons will be looking to avenge their loss from last week and to record three Premierships in a row.