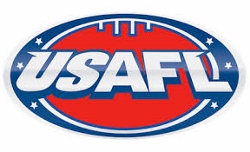 As footy in the United States closes in on the 2019 USAFL Nationals in Sarasota – Bradenton, Florida in October, the Western Regionals tournament will be held this weekend in Salem, Oregon. The following article by Brian Barrish for the USAFL looks at the tournament in detail, particularly the teams involved in each division. For more information, visit the website at: https://usafl.com/

For centuries prior to Lewis and Clark happening upon the Williamette Valley, the area around Salem was referred to by the Kalapuya people as Chim-i-ki-ti, which means "meeting or resting place".

Three years after the USAFL’s travelling midsummer roadshow came to said meeting place, it comes again to the Oregonian capital.  As it did in 2016, it will be the climax of what has, heretofore, been a memorable tour for those of us who have had the privilege to go to each of the stops on the Regional Championship series.

As we head West (young man), we happen upon teams who have dominated the National scene for the past several seasons, ones that will try to use this Saturday’s event as a springboard into the last two months of the season and into Nationals come October.

The Golden Gate Roos try for their fourth straight title.  The hometown teams, the Portland Steelheads and Portland Sockeyes, go for repeats in their respective divisions.  And everyone else is there to try and chase them down.

Here’s how each division looks as we head to Salem to wrap the 2019 Regional Championship Series.

Author’s note: the reviews below are based on the rosters made available by clubs as of Thursday afternoon, July 25th.

Historically, the past iterations of this tournament have brought together teams in the upper echelon of the USAFL men’s competition.  2019 will be no different.  Everyone will be chasing down the three-time defending champion Golden Gate Roos, who have won nine straight WRC matches going all the way back to 2016.  That year was a turning point in their current history, as they have also made the Div 1 National Grand Final in each of those years.

As in past seasons, the Roos have spent their spring focused on their five team metro competition before digging into USAFL play.  Their only game of the regular season came last month in Napa, when they handily handled Sacramento.  The Gaters’ American core remains intact, with centurion Mel Chen, tall threat Tim Lindfelt, and forward force Dan Livy set to help the Roos on to title number four.

But it’s nothing but a cakewalk to get to that point, and it won’t be this year.  San Diego has been playing metro footy as well, but it’s been against a perennially consistent LA outfit and an improving Orange County Giants squad.  The Lions come in as the in-form side, having taken out an unbeaten SCAFL title, and starting off SoCal Cup play with a 2-0 record.  They too have local vets such as Justin Valley and Bryan Powers, and they will also have the services of players from the Arizona Hawks.  Among those the East helping out is ruck extraordinaire Jason Wilhelm, who helped lead Nashville to a Grand Final spot in the D2 Centrals comp a fortnight ago.

Los Angeles’ season opened in a memorable way – they went to Phoenix and stomped their way to the Rob Dollar Memorial Cup, including a four-point win over Austin.  Yes, that Austin.  They’ll head to Salem in search of some revenge over Golden Gate for losses at last year’s regionals and Nationals, and to recover from a 1-1 start in the SoCal Cup.  Their own seasoned crop of Americans – rover Ryan McGettigan, athletic threat Gabe Martin del Campo, and ruckman Sam Murphy – will try to upend the Kangaroo apple cart.

Seattle has also been playing a lot of metro footy this spring and into the summer, though they have just two wins in BCAFL play in what is a very robust competition up there.  But they swept the Cascadia Cup on home turf, accounting for Sacramento, the Arizona Outlaws, and arch-rival Portland in the process.  Saleh Tybjee has added a new gear to the Grizz, and with Revolution caliber players like James Kinder and Austin Cox in the mix, the boys in the emerald green will be fun to watch this weekend.

In 2015, the San Francisco Iron Maidens won the Western Regional Championship, but came in third at Nationals.  Since then, they are three-time defending National Champions, but have gone 4-5 at Nationals and have finished in 3rd, 3rd, and 2nd respectively.  I’m sure Rod Serling might have something to say about this.

The Maidens come to Salem smarting from a 0-2 showing at Cascadia Cup last month, but with the knowledge that with a full side, they seem downright unbeatable.  Newcomer Katie Klatt has slipped into her role seamlessly, and elevates a team that has talent everywhere.  From Meg Leone in the ruck to Ellise Gallagher on the ball, defensively from Julie Marks through Milli Bruce, Savannah Green and the forwards, the Maidens look to end three years of disappointment at regionals.

While San Francisco hasn’t found success at regionals, the home team has.  The Portland Sockeyes have won two regionals in the last three years, including 2016, here in Salem, when they were paired with Minnesota.  As good as the Fish are, they have gotten even better.  All-rounder Simone Shepherd now has tall option Brandy Machado, speedy Lauren Williams, hard hitting on-ballers such as Hollie Petrie and Aman Weaver, and former New York Magpie Lauren Skonieczny leading the way up front.  Arizona Outlaw quick Amanda Mora, as well as former-Sockeye-now-Texas Heat player Heather Serpico tops up a team that is favored to repeat on home turf.

Seattle’s appearance in the D1 National Grand Final last year was a complete turnaround from the 0-3 record they posted at last year’s WRC, when they were held to just one major score.  They are 3-1 so far this season, and after a 1-1 showing at Cascadia, they think they have the formula for solving the championship equation.  Rookie Rachel Blum has impressed offensively alongside Amanda Boe, and the defensive trio of Stephanie Peterson, Lateah Holmes, and Amelia Kahr have been impressive in the young season.  They’ll also have the Arizona Hawks reinforcing them this year, led by forward Melissa Wilhelm and swift sophomore season player Cassie Cox.

Sacramento’s drop to Division 2 at the Nationals level brought them their first success on the women’s side, as they lifted their first championship trophy in Racine.  They too have been honing their skills in metro competition in this early months, and their first hitout, despite it being a shutout against San Francisco, proved their mettle as a competitive unit this season.  Rosemary Kloh is back from her knee injury that sidelined her for all of 2018, and she is playing the best footy in her four year career.  Speed is there aplenty, especially up front with Oanh Nguyen, Erika Titus-Lay, and Christine Flok, and that speed will be augmented with the addition of the LA Dragons players, many of whom won with Portland last season.  One-time Suns Leilani Silvio and Aileen Yoon return to the red and gold as they play the role of dark horse.

Portland’s Western Regional title last year was part of an undefeated regular season that very nearly had a fairy-tale ending.  Two loses to Minnesota changed that.  Like Division 1, the four teams in D2 remain the same, and the Steelheads chance at a double rest on if they can pick apart the competition like they did in Sacramento last season.  Their 2-1 showing at Cascadia propels them into their “home” carnival, and Scott Wagoner’s dangerous offensive output from both major tournaments last year tries to propel them further.  Veterans Matt Worden and Martin Conventry lead the well drilled boys from the Rose City, as they stand in the way of three teams getting their own mitts on the cup.

Orange County traded in their sashes for the big letter “G”, and it’s as if they’ve put on superman’s cape.  Sure, they came in runner-up in the SCAFL this year, but OC seems to be playing stronger than they have over the past three seasons.  They played tough despite starting the SoCal Cup at 0-2, SoCal Cup, and now Tyler Mounce and his team come to Salem eyeing their first regional title in four seasons.  Abe Chase stood up strongly in defense last year, and has been off to a good start in 2019.  Veterans Johnathan Collins, Seb Aguiari, and Adam Shanks have been key to the Giants’ run so far, and will need to be on point if the Giants are going to leave Oregon with the metaphorical chocolates.

In Sacramento, the Suns’ first part of the season has been competitive, albeit not one that has registered in the W-L columns.  A 1-2 record at Cascadia, defeating only the Outlaws, was followed by a valiant fight against Golden Gate in Napa.  Sacramento is a fundamentally sound side, and has been since the first appeared on the scene in 2009.  Toby Simmons keystones the backline for the red-and-gold, and Kendall “Rabbit” Hutchings provides the high-flying fireworks.  Julian David has developed into a dependable ruck and tall option, Sean MacEchern has been one of the team’s more consistent performers.

Division 4 Nationals Runners Up a year ago, the Arizona Outlaws made their regionals debut last year in Sacramento and demonstrated themselves to be a balanced ballclub.  The already experienced bunch, alongside the Las Vegas Gamblers, has already traveled to Cascadia this season, and impressed in spite of their winless record.  This season, Joey Luto and the Outlaws get another crack at this Western group, with Joey Luto’s quick decision making skills showing the way.  Defender Matthew Lambert anchors the defense, while Gamblers players Brett Anderson and Allan Brown provide pace.

Brian Barrish’s original article can be found, along with links to other USAFL stories, at: https://usafl.com/news/20190725/let-river-run-western-regional-preview 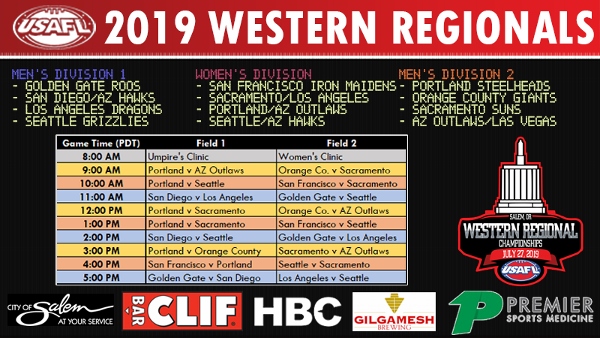