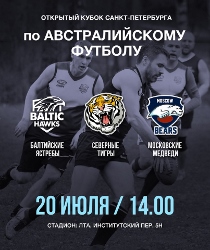 In recent years footy has continued to gather momentum in Russia. Due in no small part to the growth in St Petersburg, Moscow is also growing. Not only are there now three teams to compete in the next St Petersburg Cup next weekend, the national team had a terrific Euro Cup – their best yet.

Despite losing all of their pool games, the Russian Bears caught fire in the finals. They downed both Israel and Czech Republic in the finals matches before going down in a tough game to Scotland to finish in overall 10th places – a wonderful achievement.

That performance may not have happened if not for the improvement in competitions, recruitment and overall development of the game across the two Russian cities.
This weekend, according to the St Petersburg Cats, “we are glad to announce the St Petersburg Cup. The first after a long break, teams from both St Petersburg and Moscow will meet on the field. The Baltic Hawks, Northern Tigers and Moscow Bears will all clash on the 20th July in St Petersburg. We can't wait.”

The Baltic Hawks are one of two St Petersburg based teams – having grown from an intra-club team to a fully-fledged entity alongside the St Petersburg Tigers to make up the newly formed SPAFL (St Petersburg Australian Football League) with the best players representing the Cats team at an international level - such as the pre-Euro tournament in Finland earlier this year. The Moscow Bears are the re-branded Lazy Koalas club and the pride of Moscow.

The Cats will go into the event as favourites against the Bears, but anything can happen in these tournaments – especially when the title of Russia’s best team is at stake.