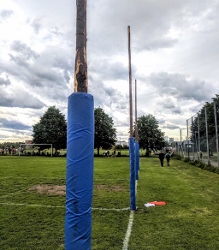 The following article from Josh Roche at www.afl.com.au looks a little deeper at the lead-up to the recent Euro Cup played in Norrtälje, Sweden. People involved appreciate how much work goes into staging an event of this size and scale. But this story highlights to what lengths some people have gone to in ensuring everything needed was found.

“No goalposts - No problem, our captain is a lumberjack”. Four footy ovals, no goalposts, one Swedish lumberjack. Game on.

AFL Europe held its annual nine-a-side tournament in Norrtälje, Sweden last weekend, and a couple of weeks out, four of the ovals were missing goalposts.

Enter Buster Sund, the Swedish Elks captain and a handy axeman off the field (he also hunts moose in his spare time, because Sweden).

"We were looking for different solutions for goalposts and had discussed [metal posts] with a few different fencing companies. We were all set and ready to go and Buster calls me one afternoon," AFL Sweden president Ryan Tucker told AFL.com.au.

"[He said], 'Ryan, I've just had the best idea. I've been out in the forest today and found some of the most beautiful straight trees. We could just cut them down, strip them and use them as posts'. I was so blown away by the idea and it was so typically Buster - and Sweden - that we got straight on board."

That same afternoon, one of Buster's Elks teammates joined him in a local forest with a chainsaw. They roamed the forest looking for the straightest, or in Buster's words, "prettiest" trees they could find.

Even in the land of Ikea flatpacks, finding 32 perfectly straight birches proved to be a challenge.

"In the end about 100 trees came down and a ruthless selection process began," said Tucker. When 32 birches had been chosen, the rest were sold to timber yards.

A few days before the tournament, Sund arranged a working bee with his Elks teammates and spent hours 'cleaning' the posts with saws, chainsaws and barking iron to get them in prime condition for footy.

Support structures were constructed to fix the makeshift posts into the ground, but after an on-site test the group settled on simply digging holes and slotting the posts straight into the turf.

The birch goalposts stand ready for the 2019 Euro Cup after the Swedish team's efforts. Pictures: supplied

Tucker wasn't the only one pleased with the unique, and very Swedish, outcome.

"The smile on Buster's face when the first set of four posts were in the ground was [like] a farmer would give a newborn calf. He was so proud and it shone through."

The tournament went ahead, with the Irish women – reigning 2018 champions – and English men taking home the silverware. Sixteen teams travelled to Norrtälje, Sweden, for Europe's major nine-a-side AFL competition. With their lumberjack skipper leading the way, the hosting Swedish Elks had close wins over Scotland and Russia in their group stage before losing to France, and being knocked out by England in the quarter finals.

England triumphed over Ireland in the final of the men's comp; the Dragonslayers defeating the Warriors but the Irish Banshees took revenge in the women's final, defeating the England Vixens to claim back-to-back Euro Cups.

To read the original article, go to: https://www.afl.com.au/news/2019-07-05/no-goalposts-stand-clear-im-a-lumberjack