Norrtälje The Centre Of Swedish Footy 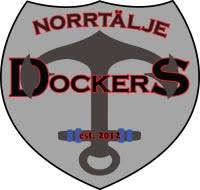 Not only did the Swedish city of Norrtälje just host an excellent Euro Cup for the cream of European footy, but the club from that city – the Norrtälje Dockers – sits in a two way shootout with the Södermalm Blues to take the 2019 SAFF premiership.

At the midway point of the season, the Dockers sit on top of the ladder, percentage ahead of the Blues though with a game up their sleeve pending rescheduling of a previous round match.

The Dockers and Blues have dominated the competition this season and there is little to suggest that the status quo will change ahead of finals in September. The Årsta Swans have struggled on field this season against the top two teams. The Solna Axemen have struggled to get teams on the field in one of their toughest seasons.

In the midst of their mid-season break, both the Dockers and Blues will be looking ahead to September and it begins when matches resume in August. These two teams will meet each other next up, and again in Round 9. Realistically, these two matches will hold the most interest – if either side wins both, they will be instilled as flag favourites. Should they win one apiece then the finals could be very much a two horse race.

With the Euro Cup now done and dusted, team focus returns to preparation for the remainder of the season. The Dockers are chasing their second flag, hoping to add to their triumph in 2016. For the Blues, a first flag since 2017 looms.

Last year’s premiers, the Solna Axemen appear unlikely to defend their title, though with two games coming against the Swans ther is still a remote chance if they can get competitive teams on the field. The Swans will also use those games as their own momentum build, hoping to secure an upset somewhere to stay in the finals race.