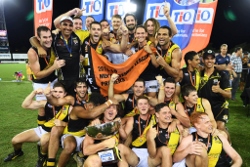 For the first time since 1965, the Nightcliff Tigers have help aloft the NTFL Premier League premiership cup after downing the Southern Districts Crocs at TIO Stadium on Saturday night. The result breaks the longest premiership drought in the Premier League and is the club’s fourth flag adding to their triumphs in 1956/57, 1960/61 and their previous most recent in 1964/65.

Since their wooden spoon in the 2010/11 season, the Tigers have been in a build to a flag, initially backing youth to build a future and more recently recruiting star players from recent years, Cameron Ilett (St Mary’s) and Phillip Wills (Darwin), winners of the past two Nichols Medals, to give the youth an experienced and highly talented leadership team.

The blending paid dividends on Saturday night when emotional scenes broke out all over TIO Stadium, and across Darwin, as the Tigers reigned supreme.

Sideline, supporters and staff kept themselves in check in the latter stages of the game, knowing the premiership was theirs but holding back the emotions until the siren had been sounded.

The first quarter was an arm wrestle with the Tigers kicking an early goal through Cam Ilett and having momentum, before the Crocs steadied with Michael Mummery kicking a goal close to quarter time to see the teams deadlocked at the first break.

The second quarter saw the Crocs keep their late momentum from the opening term, but were unable to hit the scoreboard. Nightcliff’s defence, the best in the league all season, just kept repelling the Crocs. Eventually the Tigers broke the shackles and kicked three goals to one for the quarter for a 14-point half-time lead.

The premiership quarter, traditionally the period where flags are set up, continued to be a slog. Crocs kept staying in the contest in general field play, but the Tigers just wouldn’t let them score. Two goals to one for the quarter saw the Tigers go to the final turn with a now handy 21-point lead. Crocs would need to double their own score to break even and keep Nightcliff scoreless, but that was unlikely.

The final quarter was no less enthralling, but every time Crocs tried to mount a challenge, the Tigers stood firm. Both teams kicked two goals for the quarter, with the Nightcliff Tigers holding out for an historic and emotional win.

Liam Holt-Fitz was named the Cheney Medallist for best afield in the Grand Final as tear-streaked Tiger faces – players, staff and supporters alike – took in the emotion of a premiership.

The game brings to an end the 2018/19 season for the NTFL. The results from all season grand finals are as follows: