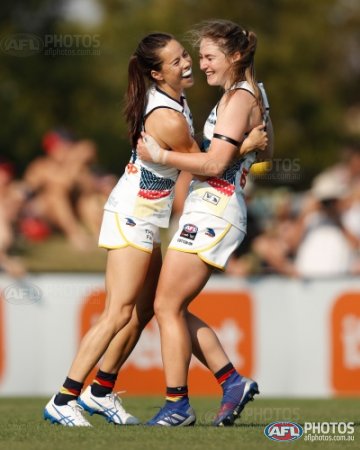 Adelaide Crows put on a demolition job of Melbourne by 61 points at the Casey Fields on a sunny day in Melbourne.

The Crows were ruthless and tough, whereas the Dees struggled to play their brand of football all day.

This win means the Crows will definitely be in the Conference A finals and the Dees will miss out again on a AFLW finals series for the third consecutive year.

The Dees recorded the lowest ever AFLW score.

Marijana Rajcic was solid in defense for the Crows for the entire match.

Harriet Cordner was the shining light for the Dees with 19 disposals.

Crows were well and truly on their game plan for the whole match at Casey, the Dees could not wrestle back the momentum.

At start of the match there was a minute of silence for Christchurch, New Zealand for yesterday’s terrorist attacks.

The win was set up with the Crows impressive first half, as they kept the Dees scoreless and all their players were working hard for each other.

It was an impeccable start for the Crows, as came out all guns blazing scoring three goals in quick succession.

The Dees had plenty of the ball but were kept scoreless and the Crows applied immense pressure on their ball movement.

Considine soccer kicked the first goal of the match from the stoppage in the goal square.

It was Considine’s first ever AFLW goal.

Soon after, Angela Foley quickly handballed the ball to Considine inside the Crows forward 50 and Considine booted through her second goal on the run.

Deni Varnhagen put through the Crows third goal from 50.

The Crows were up by 21 points at quarter time.

The Dees kicked with the breeze in the second term and the Crows continued their dominant play into the second.

Crows vice-captain Courtney Cramey kicked a ripper of a goal from the boundary to open the goal scoring in the second quarter.

Jess Foley was given a free kick for a ruck infringement and she converted the set shot for the Crows fifth goal.

The Crows took a 34-point advantage at the main break.

It was another superior quarter for the Crows in the third term, as they scored three goals and kept the Dees goalless.

Eloise Jones worked her way through the pack and kicked nicely to Chloe Scheer who snapped for goal to open the scoring for the second half.

Foley was awarded a 50m-penalty free kick, after the Dees infringed the mark.

From the goal square Foley slotted truly for goal.

Stevie-Lee Thompson placed a great run down tackle inside forward 50 and she kicked to Danielle Ponter who kicked the easiest of goals from the goal square.

The Crows led by 53 points at three quarter time.

The Crows continued to put the Dees to the sword in the final term.

Newman came off to the ground in the hands of the Dees trainers.

Chantel Emonson finally scored the Dees first goal of the match with six minutes left in the final quarter.

It was Emerson’s first ever AFLW goal.

There was a solid tackle applied and a free kick was given to Ebony Marinoff.

Marinoff notched up her first ever AFLW goal in the goal square in her third season at the club.

Soon after, Thompson put through an incredible running goal from 50m out.

The Crows obliterated the Dees by 60 points in a strong display all day at Casey Fields.

Now, the Crows are heavy favourites to win the finals in Conference A after their perfect performance.