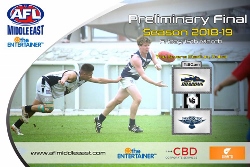 When you take a look at the cold, hard data, the Dubai Dragons will today win through to The AFL Middle East grand final next week against the Multiplex Bulls. Everything points to that result playing out, including logic. Better form, home ground, history, talent – it all adds up to a win for the Dragons.

But that is what makes footy so much fun – the unexpected. The two teams have met twice this year, both times seeing a Dragons win. But dig a little deeper under the surface and there are nuggets of information that suggest that the Abu Dhabi Falcons are not out of this race yet.

Round 2 at the Zayed Sports City in Abu Dhabi saw the Falcons desperately unlucky to lose to the Dragons by just two points. The Dragons held the lead all day until the Falcons produced a stunning last quarter fightback to nearly take the game. A reproduction of that form today could certainly change a result.

The final game of the home and away rounds saw the Dragons desperate to grab top spot. The Falcons simply needed to reduce damage to reach the finals. The Dragons were, arguably, playing for higher stakes and that showed in their 73-point win over the Falcons. They went down heavily, but the Falcons drew on something to minimise damage as the result could have blown out considerably.

Apart from that loss, the Falcons were reasonably competitive across the season. They usually managed to get a score on the board, but defensively they leaked. The Dragons had two narrow wins, a loss and three comprehensive results – two against the Dingoes. Their form has been good, but not faultless.

This game is the first ever AFL Middle East Preliminary final. Regardless of the result, it is an historic game. The Dragons will win, but the Falcons have nothing to lose. A great game is guaranteed.