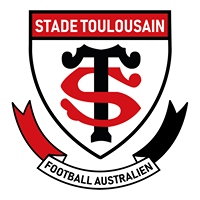 The rebranding and redeveloping of football in Toulouse has seen the former powerhouse, the Toulouse Hawks, initially sacrifice their results to help create the Blagnac Aviators. Then, as the Aviators passed into French footy history, the new two-team entity Stade Toulousain has grown in their place. The subsequent start of the new season for both Toulouse teams is cause for caution for all other French teams.

It is only early in the season, yet both Toulouse teams have recorded significant victories, suggesting that there is greater depth than ever before in Toulouse and both Stade Toulousain teams will be in the running for potential finals action next year.

On the weekend, the Stade Toulousain “A” team downed an undermanned Cergy-Pontoise Coyotes. Cergy were helped out by the Paris Cocks and also the Perpignan Tigers to get sufficient numbers. However, the Toulouse team took advantage of that situation to run away to a comprehensive 51 point lead at the main break. The second half provided more of the same as the Toulouse team piled on the scoreboard pressure to run out 153 to 41 winners.

It was a great start to the season for the “A” team, and it follows in the wake of the Stade Toulousain “1” team having won their first match back in October. Their Round One match saw an impressive 122 to 85 victory against Bordeaux on the road. With both Toulousain teams recording impressive first up wins it sends a message to the rest of the competition – there is no weaker Toulousain team.

The next matches for each Stade Toulousain team will be in Paris on 8th December. Stade Toulousain “1” will take on a much stronger Cergy-Pontoise Coyotes team, whilst their “A” team will do battle with the Paris Cockatoos. Pending the results of these matches, the competition will have a much better idea of just how strong the two Toulouse teams really are.

This weekend, the Bordeaux Bombers will be hosting the Paris Cockatoos in their Round Three clash. In the other game, the ALFA Lions will host the Paris Cockerels.