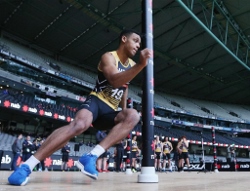 Marc McGowan reports on the www.afl.com.au website about Geelong’ signing of more Irish talent ahead of the 2019 season. To read the original article, go to: http://www.afl.com.au/news/2018-10-18/another-irish-cat-stefan-okunbor-joins-geelong

GEELONG is set to have three Irishmen on its list next year, with Stefan Okunbor to join Zach Tuohy and Mark O'Connor at the Cattery.

The final details are still being finalised, but the 20-year-old is likely to accept a two-year rookie contract with Chris Scott's side.

There will be an influx of Irish talent in the AFL in 2019, with James Madden (Brisbane) and Mark Keane and Anton Tohill (Collingwood) already signed and Jordan Morrissey linked to Essendon.

Okunbor has long been on the AFL radar and attended last year's NAB AFL Combine, along with countryman Cillian McDaid, who spent this season at Carlton before being delisted.

He went home to Ireland without finding an AFL home, but spent the past year honing his skills, as well as playing Gaelic football for Kerry and Na Gaeil.

Okunbor was the Munster region's under-20 player of the year and viewed as someone who would progress to powerhouse county Kerry's senior squad.

Former Saint and Swan Tommy Walsh's visit six years ago to his old school, CBS The Green, where Okunbor was attending, sparked the latter's interest in the foreign game.

The 190cm athlete, who is of Nigerian heritage, was hooked after watching a YouTube clip of Brownlow medallist Dustin Martin issuing one of his famous fend-offs to a hapless opponent.

"I knew this was a sport that suits me," Okunbor told AFL.com.au last year.

Okunbor scored 22 out of 30 in the kicking assessment at the Combine and ranked top 10 in the agility test and 20m sprint in an example of his physical prowess.

"I reckon it's the ball drop (that is most challenging)," Okunbor said.

"I scored a left-leg snap shot, where you turn around the corner, which is very similar (to kicking a Gaelic ball).

"But you see Tadhg (Kennelly)'s a great kicker, Mark O'Connor's a great kicker – all the Irish boys coming through, once they've been taught from the very start with someone beside them, they've improved.

"Hopefully that happens to me."

"Stefan has been one of the stars of our senior team over the past few years, as well as an underage star for the club all the way up the various age groups," the statement read.

"He was exemplary both on and off the field and a role model for all in the club.

"While we are very sad to be losing such an outstanding talent; we wish Stefan all the best from all in the Na Gaeil club.

"We hope he makes it in the AFL, but if he decides to return at any stage, the club will welcome him back with open arms."