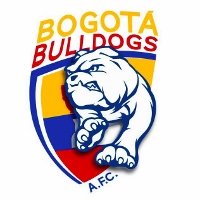 It was only late 2016 that the Bogotá Bulldogs became South America’s second permanent Australian Rules football team. In just a short time, the club has become the continent’s champion team, winning back-to-back Andes Cups against the Chilean footy stalwarts, the Santiago Saints. To some that might be seen as job done, but not the Bulldogs. Rather than be content with international titles, footy in Bogotá, Colombia, is about to have its first permanent league.

Bogotá Bulldogs’ president, Patrick Smallwood, states, “this year we have decided to put on a 9’s footy league in Bogotá over two seasons. The club will hold a draft night and try to split players evenly between the three sides. The teams are the Bogotá Bombers, the Bogotá Bullants and the D.C Aguilas.”

“Our pre-season kicks off this Saturday, with the first game to be played between the Bombers and the the Aguilas on March 3rd and finishing end of May. The second season begins start of July.”

“We played an 18 per side game to finish the season last year in November between the Bombers and Bullants and 50 people turned up to play. So we thought no better time than now to take the next step.”

“We won the hosting rights to the South American 9’s Championships for the first week of October, so we are hopeful that will be a success.”

It would be a massive move forward for football in South America for a permanent 9’s championship to take a hold. With three Colombian clubs and the potential to get the Santiago Saints to travel from Chile, a four-team championship would be a huge boost and selling point for the game on the continent. Should that concept take hold it might become the catalyst for other nations to send small teams – there has been interest shown previously in Argentina (Aguilas) and Brazil and more recently in Mexico, Peru and Uruguay.

On the annual Andes Cup tournament between the Santiago Saints and the Bogotá Bulldogs, Smallwood says, “it is Chiles’ turn to come and play us for the Andes Cup here in Bogotá and so we are pumped to host them again to defend the cup.”

Further to these developments, the Bulldogs have been active in chasing other potential visitors. “We are well into talks with a number of U.S teams to make the trip down and believe we will make a number of those a reality this year.”
“All up we are very excited for a big year and really want to test the potential of Aussie Rules here in Colombia. This also includes the running of programs at schools and other institutes. Very exciting times here for footy in Colombia.”

The Bulldogs might not have been on the South American scene for long, but in that short space of time they have also helped revolutionise the game in Colombia and beyond. They could not have achieved much of this without the platform laid by the Santiago Saints, but the Bulldogs have even bigger dreams.