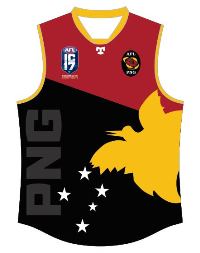 The Papua New Guinea mens team - the Mosquitos - are the reigning champions and return to Melbourne hoping to go back to back. With a proud history having competed in the tournament since its inception in 2002 - the Mosquitos have twice taken out the top prize. Their arch rivals have been Ireland and New Zealand. The Mozzies went down to Ireland in the first tournament. 2005 saw the Mozzies go down to New Zealand before revenge was gained with a win in 2008. 2011 again saw the Mozzies contest the final but falling short to Ireland. And then there was 2014 - and a relatively young Mozzies squad where able to take on and overcome the Irish Warriors in a classic International Cup finale held under lights at the MCG. There were important moments and star performances - most notably from under size ruck John Ikupu whose late screamer and goal put the Mozzies 'nose' in front and from there a memorable win.

While Rugby League is the ‘National Sport’ of Papua New Guinea, Australian Football has also has a long heritage and Australian Football was arguably the number one code post WWII and up to the 1970s. As Ron Barassi having visited PNG twice in the previous 18 months where Mr Dick Kidby (with assistance from the North Melbourne Football Club) had been appointed full-time national GM of PNG football; Barassi opined in the press in April 1978 that even after the visit to Ireland 10 years earlier that PNG was the place with the best chance of developing Australian Football. He noted the nation was evenly divided between soccer, rugby and Australian Football. In his words “We would be crazy if we didn’t make every effort to develop a formidable football force in that country”. 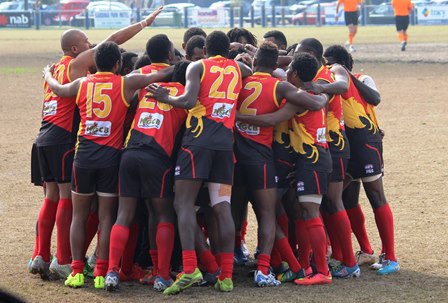 Papua New Guinea has been playing international football for a long time. From fielding an U/17 team in the Australian Teal Cup in 1979 to competing and winning at the Arufura Games during the 1990s. This was despite a stagnation in Australian support during the 1980s which in fairness was a challenging financial period for the VFL and its clubs with a national league seen as a priority – that and revenue from selling licences!

AFL PNG falls under the development eye of AFL Development Manager South Pacific, Mr Ben Drew. There are 2 Boards who run AFL PNG. Key stakeholders include the AFL and the PNG Government. In the past 12 months funding has been accessed via the Australian Governments Pacific Sports Partnership (PSP) to put towards improving governance in each (South Pacific Country – in particular, PNG, Fiji and Nauru) country; train & educate community leaders and staff; Hire more Development staff;provide more equipment & also provide more expert training & Education. “With great connection & support from AFLQLD, utilising their staff to provide training in program delivery we have seen a huge increase in knowledge and professionalism of all South Pacific staff & Volunteers at all levels across each country.”

With respect to AFL PNG specifically and a focus on the 3 years since their 2014 IC success which in itself was building upon a strong growth in the game across the regions of PNG along with improved pathways including the AFL PNG Academy program. Ben Drew worked closely with key PNG stakeholders to oversee the governance focussed evolution via a strong Board directing attention to Senior Community Football across PNG along with the national opportunities via the Mozzies and the Womens Flames. A separate Board is focussed on the development and underage programs; including hiring 20 Full time PNG staff to deliver programs across 8 regions. The two Boards have helped produce a huge increase in participation from the introductory Niukick program to the Senior Community Footy across the nation.

Queensland is a vital cog in the Talent Pathway with both boys and girls sides competing at various times in QLD state or regional championships – including the 2013 Ben Drew coached U14 Binatangs winning the QLD State Academy Championships. Over the last two years three boys have graduated from the Binatangs and played in the U/16 QLD state team at the National Championships and all 3 are in the Mozzies. Two of those lads – Hapeo Bobogai and Kelly Kaugla who last year aged 16 broke into the Broadbeach (QLD) reserves side and having played Colts and Reserves again this year just last weekend both boys at age 17 were promoted to the seniors. Bobogai having an immediate impact with the first goal 15 seconds in and finish in the best players with three for the afternoon.

The strength of the reigning champion lies in part via a list of players with some quality exposure to very good levels of footy in Australia. However – the achilles heel of the Mozzies is their lack of absoluate height especially when taking on their rivals the Irish. At ground level the Mozzies are a force to content with but the talls have to play beyond their limitations – as it was John Ikupu did just that to play a blinder in the IC14 decider.

The best-known names in the side deserve close attention - Gideon Simon (Richmond scholarship), Brendon Beno (Brisbane Lions) and Amua Pirika (Gold Coast Suns) have all brushed the AFL system. Along with these three there are a number of other players bringing experience dating back to the runners up 2011 campaign – John James, Wartovo, Aisi, Ikupu, Aki and Phillip – to perhaps constitute the ‘elder statesmen’ of the squad. The excitement of the young guns who have broken into the squad such as Kaugla and Bobogai adds to the anticipation of a side that would be expected to produce some of the most pulsating footy of the tournament.

And then there is 'Ace' - Hewago Oea who lit up the Div 2 AFL U/16 Nationals earlier this month - in the final 2 games against Tas and NT he kicked 5 and 4 goals respectively and was described as a "silky forward from Port Moresby showed incredible speed and clean ball use in his two matches, while also pushing up the ground and getting his hands on the ball".

A tough draw faces the Mozzies and their first match at 11.15am on Saturday the 6th is the IC14 Grand Final re-match and this promises to be an early highlight of the tournament.

The head coach is again David Lake who is building a solid body of work in this role, and has an extensive coaching record in Queensland (not to mention assistant coach of Brisbane's AFLW team). Assistants are Douglas Lai and Walter Yangomina. the 'Tour Director' is Scott Reid who is saddling up for his 6th campaign which is a commitment that deserves recognition. 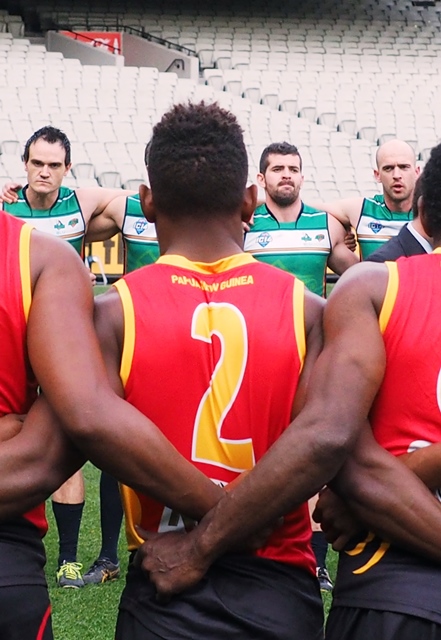